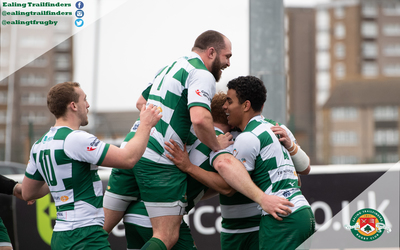 Ealing Trailfinders booked their place in the Championship Cup Semi Finals after an outstanding 36-17 victory over Jersey Reds at Trailfinders Sports Club.

The West Londoners dominated the second half and scored five tries in total to progress to the last four of the Cup for the third year in a row.

Harry Sloan, Reon Joseph, Rayn Smid all crossed the line as well as a double from Peter Lydon to secure an emphatic victory in challenging conditions once again.

The Trailfinders made the perfect start and stamped their authority on the match straight away. Two penalties were conceded by the visitors and allowed the home side to kick up to the 22. Craig Willis then spotted some space in the backfield and kicked in to the dead ball area, which led to a fortunate bounce for Peter Lydon who was able to open the scoring. Willis then converted to give his side a 7-0 lead with just three minutes on the clock.

The hosts continued to dominate the opening stages and with Rayn Smid flying through the defence but brought down just short of the line, the referee came back for an earlier penalty which was kicked by Willis to extend the advantage to 10 points.

Jersey then started to grow in to the game and got back in to it on the 20 minute mark with a try from Alex Morgan. A turnover from the Trailfinders on their own line looked to have allowed them the opportunity to clear, but a wipe looping pass was intercepted by Alex Morgan who then had an easy run to the line. The conversion went wide, but the lead was now down to five points.

Nathan Fowles then went within inches of giving the hosts the ideal response as he dummied at the breakdown and sprinted 30 metres to the line, but some superb last ditch defence from the Channel Islanders meant that they escaped.

For the remainder of the first half both sides struggled to get over the gain line and were becoming increasingly frustrated.

The Trailfinders had a rolling maul which appeared to be heading over the line until they were penalised for crossing, and in similar fashion Jersey had a five metre lineout, but an overthrow meant that the final chance of the half was missed and the hosts held a narrow 10-5 lead at the break.

The start of the second half started with the hosts on the attack, and then a crucial moment saw Rodney Iona sent to the sin-bin for the Reds after a high tackle on Craig Willis. From the subsequent penalty the Trailfinders were held up over the line, but the pressure was starting to build.

That pressure then turned in to points as a penalty came from the scrum, and Nathan Fowles took it quickly before passing straight to Harry Sloan who dived over the line in the corner. Willis’ conversion from the touchline took the lead up to 12 points.

It got even better for the Trailfinders just five minutes later, with the Jersey sin bin looking even more costly. The visitors had possession on half way and looked to play out wide, but a pass went to ground and fell in to the hands of Reon Joseph. The winger grubbered ahead and used his searing pace to gather it for a sensational opportunistic try. Willis again converted from the touchline, extending the advantage to 24-5.

Ward’s men didn’t stop there and put the game beyond doubt with another try just three minutes later to all-but book their place in the semi final. A turnover gave space for Nathan Fowles to break in to, and he had Rayn Smid alongside who raced on to the ball from 15 metres out to power under the posts. The conversion from Willis took his side over the 30 point mark.

Just as it looked like the game was won, Jersey capitalised on a mistake to get their first points of the second half. Joseph broke the line and looked like he would cruise to the line, but as he passed wide to Jack Tovey the ball was intercepted by Auguy Slowik who raced away from 90 metres to score under the posts.

Jersey then rallied and had the momentum with 15 minutes to go. Aaron Penberthy’s long pass to Leroy Van Dam looked to have given him a walk in but Willis scrambled back and then got over the ball to earn his side a crucial penalty.

TJ Harris then got another try for the Reds as they took a quick penalty and it went straight to the hooker who drove over the line, but with just five minutes remaining the hill was too steep to mount a comeback.

Peter Lydon rounded off the victory in style with the final play of the game, as a five metre scrum gave them the platform and the ball was spun straight to the full-back who beat the final defender in the corner.

That marked the end of the match and confirmed a seventh consecutive victory for the Trailfinders who advanced to the semi final in style.