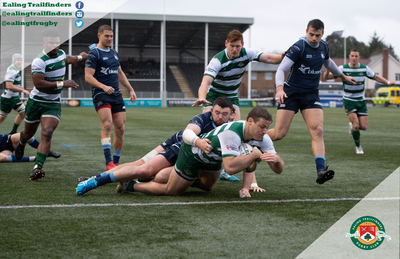 Ealing Trailfinders got their sixth win in a row after a highly impressive 38-5 victory over Bedford Blues at Trailfinders Sports Club.

Ben Ward’s side had to brave Storm Dennis and did so in stunning style, scoring 31 points in the second half to cruise to a deserved win.

Pat Howard, Reon Joseph, Alun Walker, a penalty try and two from Kieran Murphy meant that the West Londoners kept up their perfect record in 2020.

Bedford had the first opportunity as the Trailfinders had a lineout right on their own line and it went over the top, popping up to the visitors who looked like they would have a walk in but it was called back for an earlier infringement.

The conditions were causing havoc in the opening stages, but the West Londoners started to adapt and went in front with their first try after 11 minutes. A scrum just five metres from the line started to edge forward, and then the ball was spun straight to Pat Howard who was never going to be stopped from such close range. Steven Shingler’s valuable conversion in the swirling wind gave the hosts a 7-0 lead.

The Trailfinders then threatened to to extend their lead but some last ditch defence from the Blues kept the score at 7-0. From the top of a lineout a set move sent Levi Davis flying through the middle, and he passed inside to Jack Tovey who in the act of scoring saw the ball bounce out of his grasp.

The remainder of the first half was played in the middle third as both sides were struggling with their discipline, but opportunities were hard to come by. Bedford did kick a penalty to within five metres of the line with the last play of the half, but some outstanding maul defence meant that the Trailfinders headed down the tunnel with the lead at the break.

After a first half that won’t live long in the memory, the second half got off to the perfect start for the hosts who scored twice in quick succession. The kick off trickled in to the Bedford dead ball area and a huge tackle from Adam Korczyk earned a five metre scrum. The forwards then rampaged towards the line, giving the referee no option but to award a penalty try and double the lead to 14-0.

It got better for the Trailfinders just four minutes later as they took control of the game with their third try. Matt Cornish broke from the base of a ruck and powered in to the 22 before passing to Korczyk on his shoulder, who took it all the way up to the line. Rayn Smid then looked to have scored, but from the following phase Kieran Murphy put it beyond doubt and powered over.

Just as it looked like the Green and Whites had built an unassailable lead, Bedford scored out of nothing to get themselves on the scoreboard. A turnover gave them space in the wide channels, and they went through the hands giving Ryan Hutler a clear run to the line. The conversion went wide, but the Blues had cut the lead to 19-5.

With just over 10 minutes remaining, the Trailfinders secured the all-important bonus point to put the result beyond doubt. Sustained pressure in the 22 saw them edge towards the line, and then with a huge overlap on the left wing the ball was spun wide to Reon Joseph who could stroll to the line unattended.

Kieran Murphy then got his second of the match to add further gloss to the score-line and give the supporter who braved the conditions a much-needed pick me up. The hosts had clicked in to gear beautifully, and once more with plenty of pressure in the 22 the back-rower was able to beat the final defender from close range.

The final play of the match saw Alun Walker cross for the sixth and final try to round off the victory. A penalty was kicked to the corner, and in trademark style the hooker broke away from the rolling maul to score in the corner.

Shingler’s conversion from the touchline meant that the scoreline ended 38-5 to the Trailfinders, and means that they head in to next weekend’s Championship Cup Quarter Final against Jersey Reds in fine form.