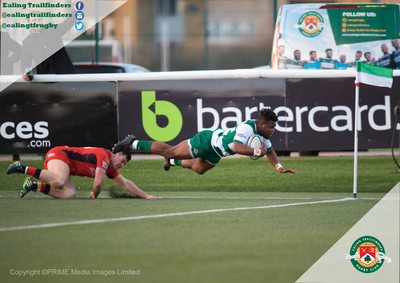 Ealing Trailfinders extended their winning run to four matches as they cruised to a 59-5 victory over Hartpury at Trailfinders Sports Club.

Ben Ward’s men crossed for nine tries in a dominant performance from minute one to 80, keeping up their perfect start to 2020. Jordy Reid and Matt Cornish both scored twice, whilst Peter Lydon, Rayn Smid, Levi Davis, Harry Sloan and a penalty try registered the points.

The Trailfinders got off to the perfect start and went in front with just two minutes on the clock. Straight from the kick off Rayn Smid and Pat Howard broke down the right wing, and then after a couple of phases the space opened up for Jordy Reid to race through the middle under the posts. Craig Willis’ first conversion of the afternoon gave the hosts a 7-0 lead.

The West Londoners were playing with real intent in the opening quarter despite playing against a challenging win, and their second try came after 15 minutes. A five metre scrum gave them the ideal platform, and Nathan Fowles picked out Peter Lydon who was able to stroll over from close range.

Try number three followed just five minutes later, and once again it came from a strong foundation at scrum-time. A powerful hit earned a penalty which was kicked to the corner and with the maul powering over the line it was brought down, giving the referee no option but to award a penalty try.

The game then started to open up in the second quarter with both teams looking to play expansively. A counter attack from the visitors saw them enter the 22, and Tiff Eden’s pass looked to have put Mike Wilcox away under the posts but a last ditch tackle from Reon Joseph managed to keep the try-line intact.

The Trailfinders got the bonus point with four minutes left of the half and extend the lead even further. Reon Joseph gathered Craig Willis’ looping pass over the top and was hauled down just inches short of the line, but from the following phase Reid was able to drive over the line for his second of the afternoon. Willis added the extras, and put his side 26-0 in front at the break.

The second half started in the same fashion as the first, and it took just 90 seconds for the Trailfinders to score. Joseph was close to gathering the restart for a walk-in, but then from the lineout they played straight from the top and space opened up for Rayn Smid to sprint under the posts. Willis’ conversion inflicted further damage on the opponents.

Matt Cornish was next to cross the line as the hosts continued to dominate in one of their most complete performances of the season. A penalty was kicked to the corner, and once again the maul drove over and allowed the hooker to dive over. The conversion from Willis brought up the 40 point mark for the Trailfinders.

Hartpury started to get some momentum as the game headed towards it’s close, and they got their first points of the afternoon with 15 minutes left. Josh Bragman grubbered deep in to the 22, and centre Robbie Smith won the race to score.

Jake Henry was then sent to the sin-bin for the visitors, and it only took a minute for the Trailfinders to take full advantage. A penalty was kicked to touch, and the maul meant that Cornish could dot the ball down for his second of the game.

Then straight from the restart a try of the season contender stunned the home supporters and broadened the smile on their faces. Willis and Steven Shingler made space in the midfield and looped a pass to debutant Levi Davis, who ran through half of the defence from 60 metres, using his searing pace to score in stunning fashion. Willis then converted from the touchline as the lead extended to 54-5.

Harry Sloan rounded off the match with the ninth try for the Trailfinders with just one minute left. The ball went loose from a scrum but it bounce up nicely for the Green and Whites straight in to the hands of Sloan who crossed for a deserved score on his return to the side, confirming a huge victory.