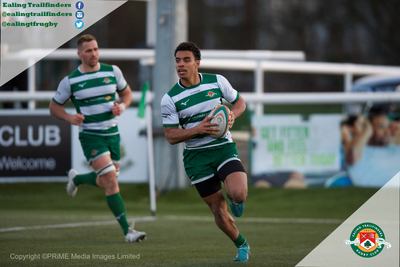 Ealing Trailfinders got their second consecutive victory in the Greene King IPA Championship after a dominant 77-26 win over Ampthill.

The West Londoners scored 11 tries in total as the attack fired in impressive fashion to give Ben Ward’s side a confidence boosting win.

The hosts got off to the perfect start and Jordan Els opened the scoring after just four minutes to give them the lead, the South African broke away from a powerful maul to dot the ball down. Steven Shingler’s conversion was the first of seven from his boot to put them 7-0 ahead.

The lead doubled with eight minutes on the clock in identical fashion, with another maul allowing Dave McKern to score. Tommy Bell then gathered Elijah Niko’s audacious offload for try number three as the Green and Whites started to pull away, playing some scintillating rugby.

Ampthill got on the scoreboard at the end of the first quarter as Henri Williams went over from close range, but that would be as good as it got for the visitors who saw three tries conceded in the remainder of the first half.

Alun Walker scored two tries in 10 minutes from rolling mauls to extend the lead to 35-7, and Pat Howard then powered over from just two metres out to give his side a 42-7 advantage at the break.

The second half started in similar fashion to the first, with Reon Joseph scoring the try of the match to put the result beyond doubt. Steven Shingler’s cross field kick was judged to perfection, and Joseph gathered it before racing clear from 40 metres to the delight of the home crowd.

Tommy Bell then brought up the half century as he was the beneficiary of Jordy Reid’s inside pass to score under the posts for his second of the match. Ampthill crossed for their second shorty after as Sam Baker pounced on a counter attack as the game headed in to the final quarter.

Craig Hampson had a clear run to the line with an overlap on the right wing, but then Ampthill registered a deserved bonus point as Rob Langley and Sam Hanks both scored from close range.

There was still time for Lewis Jones and Matt Cornish to add more gloss to the scoreline with tries number 10 and 11. Jones gathered an offload and ran through from just inside the 22, before Cornish once again powered over from a maul to end the game in the same way it started.

That confirmed a 77-26 victory, and ensured that the Trailinders head in to next Friday’s derby at London Scottish in fine form.