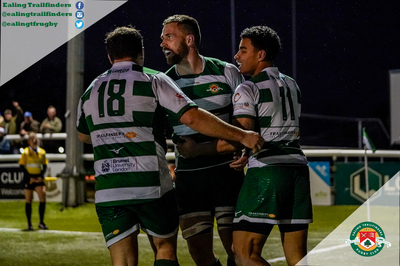 Ealing Trailfinders suffered defeat in the top of the table clash against Newcastle as they went down 26-14 against the Falcons.

Ben Ward’s side enjoyed the majority of the possession and territory throughout but were punished for not taking their chances and were left empty handed after a relentless 80 minutes.

The Trailfinders started well and were in the ascendancy in the early stages of the match. A clearing kick from Steven Shingler fortuitously bounced up in to the arms of James Cordy Redden who was in acres of space but the Falcons defence scrambled back to wrestle him down.

Newcastle then opened the scoring with 16 minutes on the clock to take the lead. The Trailfinders were going through the phases in attack but Josh Matavesi intercepted a pass and then ran the length of the field to score under the posts. Toby Flood’s conversion extended the advantage to 7-0.

It then got better for the Falcons just three minutes later as Adam Radwan burst through for an individual score to shell-shock the Trailfinders defence. From a lineout a flat pass saw the winger beat the first man and he then used his searing pace to sprint through two defenders and dive over the line. Flood again added the extras to give the visitors a 14 point lead after the opening quarter.

A penalty for the hosts on the half hour mark then allowed the West Londoners to enter the Falcons 22, and that trip ended with them getting on the scoreboard. A maul was powering towards the line and it was brought down illegally so the Trailfinders opted for a kick at goal which Steven Shingler smashed through the posts, cutting the gap to 11 points.

Will Welch was then sent to the sin bin for the Falcons, and they were put under immense pressure until half time. Their maul defence allowed them to escape one attack from the hosts, but on both of the next visits in to their half a penalty allowed Shingler to dissect the posts and cut the deficit to just five points at the break.

The Green and Whites started the second half strongly and built the pressure in the early stages. Reon Joseph was within inches of scoring a wonder try as he stepped his way past a number of defenders on the wing, but in the act of putting the ball down he was hammered in to touch.

Shingler then spotted some space in behind and kicked towards Joseph who again was looking a threat, but the bounce fell kindly for the Falcons who managed to clear.

Dean Richards’ side then got some territory and threatened to extend their lead. With an overlap on the wing it looked as if Adam Radwan would get his second of the match, but Joseph scrambled back to keep him out.

The Falcons then landed what looked to be a decisive blow with 15 minutes remaining. They had two men free on the wing but as Tommy Bell looked for an interception he slapped the ball down, and the referee had no option but to give a penalty try and a yellow card to give the league leaders a 12 point lead.

That try however sparked the hosts in to life and they responded immediately. Shingler’s grubber kick found space, and Rayn Smid timed his run perfectly to dot the ball down before it went dead. The conversion went wide but the Trailfinders were eyeing up a late comeback to overturn a 14-21 deficit.

Any hope however of a memorable turnaround was ended when the Falcons went over for their bonus point try with just two minutes left. A kick ahead bounced in the Trailfinders 22 and it ended up with Gary Graham who was able to scramble over the line.

The hosts stayed in the fight for the final minute but the Falcons smashed the ball in touch to extend their lead at the top of the table to 11 points.