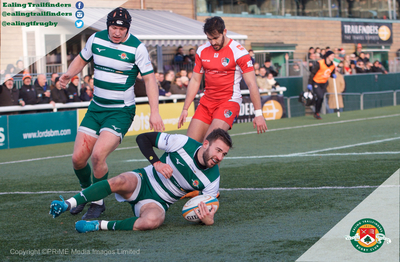 Ealing Trailfinders secured a home Quarter Final in the Championship Cup after a dominant 56-19 victory over Coventry.

Ben Ward’s side scored eight tries in total as their physical dominance gave them the platform to run away with another impressive win at Trailfinders Sports Club.

Jordy Reid gave the hosts the perfect start with a try after just three minutes to put them in front. A rolling maul powered towards the line and the Australian broke away, giving himself a clear run to the line. Steven Shingler’s conversion put them 7-0 in front.

The visitors then sparked in to life straight away and responded just 60 seconds later to get level. A knock on bounced up in to the hands of Max Trimble, and he pounced on it to race away in to the corner.

Andrew Durutalo, who was outstanding throughout then gave the Trailfinders the lead with 12 minutes on the clock. A penalty was kicked to the corner and then after going through the phases, the back-rower was able to power over from just two metres out. Shingler then kicked a penalty before the 20 minute mark to extend the lead to eight points.

Coventry got back in to the game as Andy Bulumakau intercepted a pass and ran the length of the field to score, but the hosts then took their performance up a level to secure the bonus point before the break.

Craig Hampson spotted a gap in the defence from the base of a ruck and dummied his way to the line, before Tommy Bell pounced on Steven Shingler’s grubber kick to give the West Londoners a commanding lead.

Ben Nutley was sent to the sin-bin for killing the ball for the visitors, and Shingler then added another three points from the resulting penalty to put the host 32-12 up at the break.

The second half started in electric fashion and Rayn Smid scored a captain’s try with just 90 seconds played. Lewis Jones carried all the way to the line, and then the ball was spun wide to Smid who strolled in to the corner unattended.

Coventry then scored an opportunistic try as Jack Ram took advantage of an overthrown lineout to dot down, but the Trailfinders then went on the rampage with three tries in the final 10 minutes.

Shingler and Willis combined in the midfield and fizzed a pass to James Cordy Redden who had a clear run to the line on his return to the starting line-up to the delight of the home supporters.

Jordan Burns then ran clear from the half way line in trademark style as he timed his supporting run perfectly to hit the ball at searing pace, and Shingler’s conversion brought up the half century of points.

Kieran Murphy rounded off the scoring as he capitalised on an overlap created by Elliot Millar Mills’ break, giving the Green and Whites a commanding win to book their place in the last eight once again.