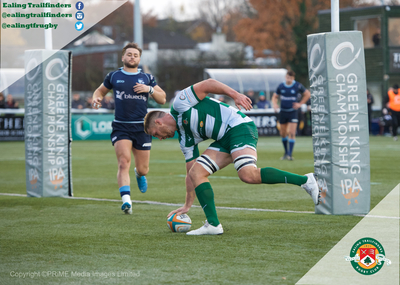 Ealing Trailfinders rampaged their way to their biggest win of the season after a huge 80-17 victory over Bedford Blues.

The West Londoners scored 12 tries in total in a relentless attacking display to put the Blues to the sword in mightily impressive fashion.

Once again the Green and Whites started quickly and scored their first try inside the opening 60 seconds. Craig Willis went straight through a gap in the defence and had Elijah Niko alongside him who crossed for his first try for the club.

Bedford however responded straight away and took the lead with 3 minutes on the clock. Dan Temm intercepted and raced through from 50 metres out to score. Lewis Robling’s conversion gave the visitors a 7-5 advantage.

That seemed to galvanise the Trailfinders who then scored three tries in six minutes to take control of the match.

Elliot Millar Mills powered over from close range to put his side back in front, before Reon Joseph had a walk in to the line after Tommy Bell’s pass out the back.

Craig Willis then strolled through an enormous hole to secure the bonus point, as the Trailfinders held a 24-7 lead with only 16 minutes played.

Rayn Smid was next to cross the line in a strong captain’s performance, again Bell was playing at second receiver and hit the skipper with a flat pass to cruise his way over.

Bell was rewarded with a try of his own on the half hour mark, a five metre scrum gave the hosts a fine attacking platform and as it spun wide the full-back then squeezed over in the corner.

Fields then got one back for the Blues from a rolling maul, but the Trailfinders still had time for two more tries before the break to bring up the half century.

Elijah Niko pounced on Willis’ cross field kick to bring up the 40 point mark, and then Jordy Reid was the beneficiary of Andrew Durutalo’s big carry to make it 52-12 to the hosts at half time.

The Trailfinders showed no signs of letting off in the second half, with Harry Sloan scoring after just 90 seconds. Another defence splitting pass from Willis allowed the centre to run clear from outside the 22.

Bedford then looked to rally as they eyed a try bonus point, and Dan Temm took a penalty quickly to score their third.

The Green and Whites however refused to let off and scored three more tries in the final quarter to extend the lead even further.

A collapsed maul fell just short of the try-line, and Kieran Murphy was there from the next phase to batter his way over. Craig Hampson then quick-tapped from just five metres out to bring up 70 points, and David Johnston then rounded off the scoring with a long range try to broaden the smiles on the home supporters.

Craig Willis added his 10th conversion to make it 80-17, and confirm an enormous victory for the Trailfinders who go from strength to strength in the Championship Cup.