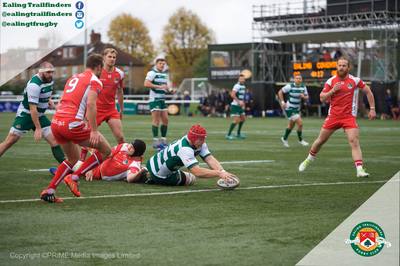 Ealing Trailfinders were stung by a late comeback as Coventry scored two tries in the final quarter to leave West London with a 28-28 draw.

Ben Ward’s side had built a 28-14 lead with 20 minutes remaining after tries from Kieran Murphy, Matt Cornish, Rayn Smid and Harry Casson but had to settle for a share of the points on a wet and windy day at Trailfinders Sports Club.

The Trailfinders once again made a fast start and took the lead with just five minutes on the clock, a trait that has served them well so far this season. A penalty was kicked to the corner, and with the ball coming straight down from Rayn Smid it fell to Kieran Murphy who powered his way to the line from close range. Craig Willis added the extras to give the hosts a 7-0 lead.

Coventry then looked for a response and after a period of sustained pressure they got their reward. A succession of penalties saw them edge towards the line and then a rolling maul allowed Darren Dawidiuk to break away and open their account. Will Maisey’s conversion sailed over the posts to level the score.

Matt Cornish then put the hosts back in front just a minute later as the Green and Whites scored straight from the re-start. A penalty almost immediately was kicked within five metres of the line, and then in trademark style Matt Cornish was on hand at the back of the maul to score for the second consecutive week. Willis was again on the money from the tee to increase the advantage to seven points.

Craig Hampson was sent to the sin-bin on the half hour mark after an attempted interception was slapped down, and that allowed Coventry to cross the try-line again as they started to dominate the rest of the first half.

They inched towards the line and then found Rory Jennings who picked a great line to burst past the final defender. Maisey’s conversion made it 14-14 as the clock edged towards half time.

Rayn Smid looked to have put the Trailfinders back in front but was held up over the line to the disappointment of the home fans, and the sides then headed down the tunnel after a tight opening 40 minutes.

Ward’s men came out firing in the second half and were rampant in the opening stages to take control of the match.

Elijah Niko smashed past a couple of defenders to take play over the half way line and Harry Casson then broke as he entered the 22. Willis lifted the ball over the top and Rayn Smid was on hand to power over, giving his side the lead again. The flags went up for WIllis’ conversion as they once again held a seven point advantage.

Reon Joseph was then inches from getting on to the end of Craig Hampson’s box kick, but it didn’t take long for the bonus point try to arrive as Harry Casson bundled over.

A penalty was kicked to the corner and despite going close from the maul, Casson forced his way through the defence after minutes of pressure to give the hosts some breathing space.

Coventry refused to lie down and got back in to the match with a try from Max Trimble. They had possession on the half way line and a speculative pass found the winger in acres of space who had the pace to run clear. Maisey’s excellent touchline conversion cut the deficit to just seven points.

The pressure was building as the visitors eyed up a draw, and they would seal a share of the spoils with just three minutes left. Rory Jennings saw David Halaifonua on the wing and delivered an inch-perfect cross-field kick which allowed the Tongan international to score in the corner. Maisey again nailed the conversion under immense pressure to tie the scores.

Late drama then saw Rayn Smid crash his way past a number of defenders and race up to the half way line with Ben West on the inside, however the visitors managed to scramble back and ensure that the referee would signal the end of the match.

The Trailfinders now face two weeks on the road against Yorkshire Carnegie and Doncaster Knights as they look to regain their form.