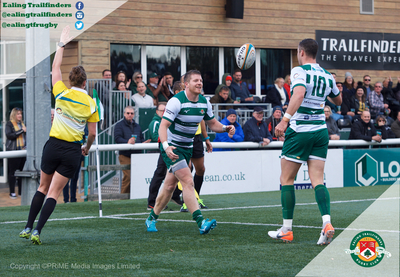 Ealing Trailfinders got back to winning ways in style after an eventful 52-38 victory over Jersey Reds at Trailfinders Sports Club.

Ben Ward’s side scored seven tries in total to register their first win of the league season, a win that was built on a relentless first half performance which saw them lead 33-0 at the break.

Jersey responded in the second half with six tries of their own to make for an eventful 80 minutes in the West London Autumn sun.

Dave McKern opened the scoring for the hosts after just six minutes to put them in front. A penalty was kicked to the corner and from the rolling maul, McKern broke away to cross the line against his old club. Steven Shingler added the conversion to increase the advantage to seven points.

Shingler then kicked two penalties in quick succession to put his side 13-0 up as the opening quarter drew to a close, and from then until half time the Trailfinders took their performance up a gear to take control of the match.

Alun Walker rumbled over for his 50th Ealing Trailfinders try with 25 minutes on the clock in trademark style as he broke away from a maul to power to the line. That was then quickly followed by James Cordy Redden crossing for an outstanding score on the half hour mark. An attacking lineout put the Trailfinders on the front foot, and an inside ball from Jordy Reid found the winger who was able to race clear from 20 metres.

It got even better for Cordy Redden just two minutes after as he dived over in the right hand corner again to secure the bonus point. After going through the phases in the 22 there was an overlap on the right, and quick hands found him to bring up 30 points for the hosts as half time approached.

Shingler then kicked his third penalty with the final play of the half to increase the lead to 33-0, a commanding position as the teams headed down the tunnel.

Jersey came out firing in the second half and scored after just two minutes as they looked to get back in to the match. Leroy Van Dam broke the defensive line and passed to Kyle Hatherell who had a free run in to the corner.

The Trailfinders responded straight away to regain control as Will Davis marked his return to Vallis Way with a try. A five metre scrum gave the hosts the platform, and the ball was popped up to the prop from the following phase who picked a great line to score under the posts. Shingler’s conversion increased the lead to 40-5 with half an hour remaining.

The visitors were thriving on loose ball as the game began to open up, and with searing pace in the back-line they began to take advantage. Van Dam capitalised on an opportunity to score their second, but once more the Trailfinders responded. A penalty allowed them to kick in to the corner, and once again Alun Walker broke off the back of a maul as he scored his second of the match.

Jersey then scored twice in quick succession as they registered a deserved four-try bonus point. Van Dam dotted down before Auguy Slowik also dived over for identical tries as once again loose ball ended up in their hands, and all of a sudden the lead was cut down to 19 points.

Matt Cornish brought up the half century of points for the hosts with just five minutes remaining as another rolling maul allowed him to score, and Shingler’s conversion saw the scoreboard read 52-26.

Jersey still had two tries left in them in the closing stages, with Will Homer pouncing on a grubber kick to complete his hat-trick before Jack MacFarlane went over from close range to round off the scoring.

The ball was then smashed in to touch to confirm a 52-38 victory after a breathless 80 minutes, and with another big test against Bedford Blues next weekend, a timely confidence boost was secured by the Trailfinders.