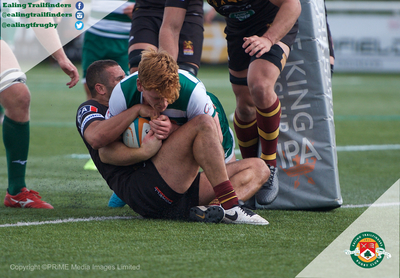 Ealing Trailfinders made it two wins in two matches so far in the 2019/20 season after a dominant 43-5 victory over Ampthill at Trailfinders Sports Club.

Ben Ward’s side scored seven tries in total with the foundations coming from a strong set-piece to give them front foot ball throughout.

Andrew Durutalo, Reon Joseph, Harry Sloan, Jack Tovey, David Johnston all crossed the try-line as well as a double from Ben West to ensure that the Green and Whites registered another bonus point win.

The first try of the afternoon came from Andrew Durutalo with just 10 minutes on the clock as a scrum was turned on it’s head and the ball popped out straight to the back-rower who powered over the line from five metres out. Craig Willis added the conversion to give his side a 7-0 lead.

Reon Joseph scored try number two just four minutes later as the hosts began to take control of the match. After a penalty was kicked to touch the Trailfinders entered the 22 and from first phase a huge looping pass from Craig Willis allowed the winger to run in to the corner unattended.

Harry Sloan scored try number three inside the first quarter with an outstanding team try. James Cordy Redden and Rayn Smid combined down the wing, and passed inside to the man of the match who coasted through to the line to extend the lead to 17-0.

Ampthil got a deserved try on the half hour mark with a piece of quick thinking which ended in a smart try. With a penalty awarded a cross-field kick landed in the arms of Will Foster who got the visitors on the scoreboard.

Jack Tovey then secured the bonus point with the final play of the first half. An overthrow opened up an opportunity for Kieran Murphy who was brought down just short, and the ball was recycled to Tovey who powered over the line.

Both sides struggled for momentum in the second half due to the large amount of stoppages, and a number of opportunities passed both teams by with handling errors costing them.

Ampthill were reduced to 14 men with Matthew Collins sent to the sin bin, and after a whole host of replacements the Trailfinders took advantage with three tries in the final quarter.

Ben West smashed over from close range after going through the phases on the try-line with 15 minutes left to take the tally over the 30 point mark.

David Johnston then crossed with his first touch after some smart hands from the scrum. Two dummy runners created the space, and allowed the Irishman to dive over from five metres out.

The final play of the match saw the Trailfinders score with a memorable try to confirm the victory. A turnover fell in to the hands of Oli Robinson who released Tommy Bell down the wing, and he drew in the final defender before passing inside to Ben West who ran through from 30 metres.

That try took the total up to 43 points, and signalled the end of the match to ensure that the Green and Whites made it two wins from two ahead of next Friday’s trip to Coventry in Round Three of the Championship Cup.