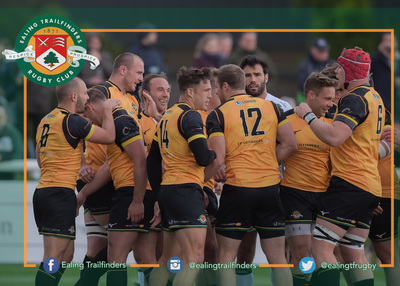 Ben Ward’s side were forced to defend their own line for the final three minutes but managed to smash the ball out to confirm a memorable victory in front of a record crowd.

The Trailfinders were showing no signs of nerves in the opening stages and dominated the first quarter, resulting in the first try of the match after just 11 minutes. A penalty was kicked to the corner, and from the lineout Craig Willis floated an inch-perfect pass to Seb Stegmann on the wing who was able to score in the corner. The conversion blew wide in the wind, but Ward’s side were showing their intent.

It almost got even better just five minutes later as Jordan Burns raced away for a try, however it was disallowed by the Television Match Official. Willis, who was playing sublime rugby dummied and broke through the line before releasing Burns. The scrum-half stormed his way to the line, but in the process of scoring a knock on was called.

Will Harries then scored the second try on the 20 minute mark as the hosts continued their dominant start. Willis kicked in behind and it bounced up perfectly to Harries who was able to dive on the ball to score. The conversion was wide but the lead was now up to 10 points.

Irish responded immediately and scored 10 minutes before the half-hour as they ramped up the pressure. Ben Loader pounced on a loose clearance and skipped through the entire defence to race under the posts. Stephen Myler converted as the lead was down to just three points.

Willis then kicked a penalty as the Trailfinders went six points in front, but just three minutes later Myler kicked one for Irish to cancel it out.

A crucial moment came just before half time as Scott Steele took a quick penalty and scored from just five metres out, however the TMO said he was just short and the Trailinders went down the tunnel at half time with a 13-10 lead.

Ward’s men started the second half brilliantly and extended their lead after just five minutes. An incredible spell of play saw them go through 36 phases in the Irish 22, and with a penalty given they spun the ball wide to David Johnston who beat the final defender to score. Willis converted to extend the lead to 10 points.

Willis then kicked a penalty to take the lead up to 13 points, but Irish came back and scored as Terrence Hepetema bundled over the line. The conversion cut the lead to just six points with 10 minutes to go.

A penalty on half way looked to have secured the victory, however the kick missed touch and Irish came raring back in the final minute. With the ball on the Trailfinders’ line they managed to hold out the pressure and fire the ball in to the stands to begin the enormous celebrations as the 2018/19 season ended with silverware.

Man of the Match: Craig Willis