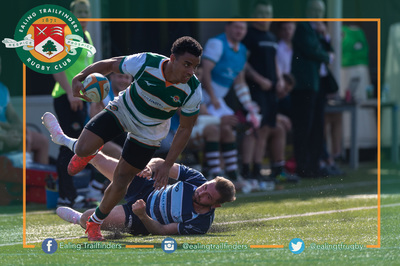 Ealing Trailfinders rampaged their way to a relentless 54-21 victory over Bedford Blues at Trailfinders Sports Club.

Ben Ward’s men scored eight tries as they dominated the entire 80 minutes to register another impressive win as their fantastic end of season form continues.

The Trailfinders made an electric start and had the bonus point secured within the first half an hour, with the first try coming from Rayn Smid after just 10 minutes. A five metre scrum saw the hosts given a number of penalties in succession, and they played from the advantage by spreading the ball wide. Kieran Murphy then picked a great line and offloaded to Smid who was able to dot the ball down from close range. Craig Willis added the conversion to give his side a 7-0 advantage.

Will Harries then scored two tries in as many minutes as the Green and Whites took control of the match in the opening quarter. A Jordan Burns break on half way saw him skip past three defenders, and he drew in the full back before passing outside to Harries who had a clear run to the line. Willis was on target again as the lead grew again.

Just two minutes later Harries crossed again to the delight of the home supporters who were enjoying some impressive rugby in the sun. Bedford were looking to get on the front foot and were going through the phases on half way, but a looping pass was intercepted by the Welshman and he ran under the posts from 50 metres to score try number three. Willis’ conversion put the hosts 21-0 up after just 20 minutes.

Bedford responded immediately to score their first points of the afternoon with a try from Dean Adamson. They had the ball deep in the 22 and spun the ball out to Adamson who stepped inside past four defenders to dive over the line. Will Hooley’s conversion cut the deficit to 14 points.

The Trailfinders reasserted their control and went further ahead just before the half hour mark as they also secured the bonus point with try number four. They worked their way up to the line and then a trademark zipping pass from Craig Willis found James Cordy Redden on the wing who finished powerfully in the corner. The conversion went just wide but the lead was now a dominant 19 points.

It got even better before half time as a wonder try from Reon Joseph put the result beyond doubt. A scrum on the hosts’ try-line was spun straight to the 19-year-old, and he skipped past the entire Bedford defence and showed his incredible pace to score a try which caused the home supporters to erupt. Willis kicked the conversion and his side then headed down the tunnel with a convincing 33-7 advantage at the break.

Bedford started the second half well and scored after just five minutes as they looked to start a comeback. A penalty was kicked to the corner, and James Lennon dummied from the base of the maul to dive over the line. Hooley added the extras as the visiting supporters got some optimism with 35 minutes remaining.

The Trailfinders however were in no mood to allow Bedford back in to the game, and responded with a try straight away to keep the momentum going. A penalty was smashed deep in to their 22, and with the maul powering over Jordan Burns was able to snipe away to score a deserved try. Willis, who had his kicking boots on brought up the 40 point mark with the conversion.

Try number seven came on the hour mark as Ward’s relentless side continued to dominate in a fantastic performance. Pat Howard and Lewis Jones broke through the line as the centre pairing kept getting better, and after being brought down just short the ball was recycled to Kieran Murphy who was never going to be stopped from just three metres out. The conversion from Willis extended the lead to 47-14.

Alun Walker marked his 100th appearance for the club with a try to bring up the half century of points with just one minute remaining. In trademark fashion the hooker broke away from a maul and dotted down for yet another score. Willis scored the hosts’ final points of the game as the conversion sailed through the posts.

Bedford scored a consolation try as Pat Tapley stepped his way to the line from half way but it proved too late as the referee blew the final whistle to confirm a 54-21 win for the Trailfinders.

The Green and Whites now head to the Madejski Stadium to sign off the Championship season against London Irish before welcoming the same opponents for the Cup Final on Saturday May 4th.