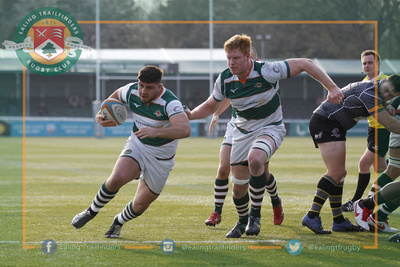 Ealing Trailfinders got their second consecutive victory after a 35-19 bonus point win over Nottingham at Trailfinders Sports Club.

Ben Ward’s side scored five tries in a dominant display to get a deserved win thanks to scores from David Johnston, Harry Sloan, Alun Walker, Matt Cornish and Kieran Murphy.

Both sides struggled to create any clear cut chances in the opening stages as they adapted to the unusually warm conditions, but the Trailfinders steadily grew in to the game and went in front after 15 minutes with the first try of the match.

Craig Willis’ inch-perfect cross kick was gathered brilliantly by Reon Joseph who towered above his opposite number to claim the ball, and he popped it up to David Johnston who dived over the line in the corner. Willis added the extras from the touchline to put his side 7-0 in front.

Jordan Burns was then denied a try on the half hour mark as it appeared he had put the hosts further ahead. Harry Sloan broke the line and passed to Burns who used his electric pace to race past the defence, but just as he was in the process of putting the ball down he was chopped down which resulted in a knock on. The referee checked for a high tackle but judged the tackle legal and Nottingham escaped.

The Trailfinders got a deserved second try just before the break to extend their lead. A five metre scrum gave them the perfect platform, and the ball was spun straight to Harry Sloan on the crash ball who powered his way over the line from close range. Willis again converted as the Green and Whites went down the tunnel with a 14 point advantage.

The hosts made the perfect start to the second half as an early try confirmed their dominance and gave them full control of the match. Reon Joseph broke down the wing but was brought down just short, however play came back for an earlier penalty which was kicked to the corner. From the lineout the maul went all the way to the line and Alun Walker was there to score try number three. Willis again added the extras as the lead stretched to 21 points.

Nottingham made an immediate response and scored their first points of the afternoon virtually straight from the restart. They got a penalty and kicked it deep in to the Trailfinders’ 22, and after going through the phases Shane Buckley was able to cross for a try. Shane O’Leary converted to get the visitors a much needed way back in to the game.

Harry Sloan then went within inches of his second try which would have secured the bonus point when he capitalised on Johnston’s break to carry up to the line, but his offload was knocked on and the chance was missed.

The bonus point was however secured on the hour mark as Matt Cornish went over for try number four. Another penalty inside the 22 was kicked to the corner and the maul, which functioned well all afternoon allowed the hooker to break away and score. Willis was once more on target with the conversion to put the Trailfinders 28-7 ahead.

Nottingham again hit back with a try from the restart as they cut the deficit. They had sustained pressure in the 22 and spun the ball wide to Jordan Coghlan who ran over the line unattended. The conversion went wide but Ward’s side still held a 16 point lead.

Kieran Murphy put the result beyond doubt with try number five for the hosts with just 10 minutes left on the clock. The Trailfinders were camped inside the Nottingham 22 and the back-rower picked a great line to catch the defence off guard and was able to jog to the line from 20 metres out. Willis’ conversion moved his team 35-12 in front as we approached the closing stages.

Nottingham went over for a consolation try with just two minutes remaining to score the last points of the match. O’Leary’s miss-pass allowed Billy Robinson to go straight through the defence as it opened up straight in front of him. The conversion went over and the visitors then chased the bonus point in the last play of the game.

The Trailfinders managed to close out the final stages to confirm a 35-19 win in the Spring sunshine at Trailfinders Sports Club.