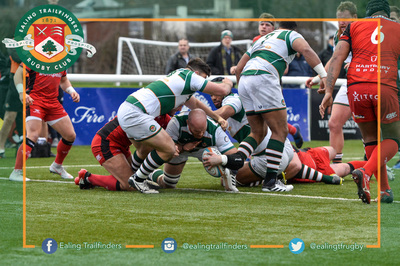 Ealing Trailfinders completed a dramatic second half comeback to secure a crucial 22-14 victory over Harptury at Trailfinders Sports Club.

The West Londoners overturned a 14-0 deficit with half an hour remaining to secure a seventh consecutive victory thanks to tries from Sam Dickinson, Rayn Smid and a penalty try.

In a first half littered with errors the Trailfinders were met by a resilent Hartpury defence who were frustrating the hosts.

Ben Ward’s side started promisingly and Harry Sloan carried from close range as he looked to go over for the first try but he was hit back and after going through a number of phases the visitors got a penalty.

The Trailfinders continued to enjoy most of the territory but failed to turn that in to points. They again went close when Rayn Smid got over the gain line and looked to offload to Peter Lydon but the pass went forward.

Hartpury then took the lead against the run of play as Ben Vellacott opened the scoring. A five metre scrum gave them the ideal attacking position, and the scrum half dummied from the base to dive over the line. Tiff Eden converted to give the visitors a seven point advantage.

Then came a crucial moment before the break as a sequence of five consecutive penalties from the scrum right on the Hartpury line looked to get the Trailfinders back on level terms, however after a five minute spell ended up with the visitors getting a penalty and they were able to clear to the anger of the home supporters.

The Green and Whites continued to hammer away at the Hartpury line but they ran out of time and went down the tunnel at half time trailing by seven points.

The Trailfinders began the second half with similar intensity but it was Hartpury who extended their lead to go further ahead. They went through the phases right up to the line, and then Vellacott dummied again from just a metre out to score. Eden added the extras as the advantage went up to 14 points.

The bench then came on for the hosts and made an instant impact as Matt Cornish made a break down the wing to take the Trailfinders up to the line. A penalty was then awarded and from the maul Sam Dickinson bundled over to get them back in to the match.

Seb Stegmann then had a chance down the wing as a turnover ball saw the defence open up but in admirable fashion the Hartpury defence rushed back to drag him in to touch.

The Trailfinders scored their second on the hour mark as the comeback took another step forward. In identical style a five metre lineout was mauled to the line, and this time it was brought down which forced referee Sara Cox to award a penalty try and cut the deficit to two points.

Rayn Smid completed the comeback with just 10 minutes left to send the home supporters in to raptures. The hosts had a five metre scrum and the captain powered over from five metres out to put his side in front. Lydon added the extras, giving the Green and Whites a five point advantage.

Peter Lydon then sealed the victory with a monstrous 50 metre penalty as the clock ticked away, putting the Trailfinders 22-14 ahead.

Ward’s men closed out the final seconds and smashed the ball in to the stands to celebrate a vital victory as they maintained their tital challenge.