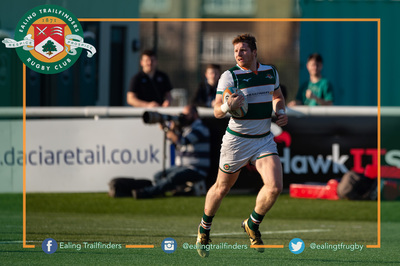 Ealing Trailfinders stormed through to the Championship Cup Final after an emphatic 58-26 victory over Cornish Pirates at Trailfinders Sports Club.

The West Londoners scored nine tries to book their place in the final against London Irish in May.

Despite their eventual dominance on the scoreboard it was the Pirates who started strongly and raced in to a 21-5 lead in the opening quarter.

Dan Frost broke through the defensive line to put the visitors in front with just one minute on the clock, and that lead was doubled straight after when Alex O’Meara pounced on a length of the field kick to dive over in the corner. Harvey Skinner added both conversions to put his side 14-0 up.

The Trailfinders responded straight away as Jordan Burns scored the first of his four tries to cut the deficit. Kieran Murphy got over the gain line and passed to the scrum-half who had the pace to run clear from 30 metres. The conversion went wide and then the Pirates went over for try number three to extend their advantage.

Robin Wedlake pounced on a looping pass to intercept and score, with another conversion from Skinner putting them 21-5 ahead. That seemed to galvanise the Trailfinders who then hit back with three tries before the break to go in front.

Burns got his second after jumping on Harry Sloan’s offload and again racing away from outside the 22, before James Cordy Redden dived over in the corner in impressive style. Laurence May added both conversions to cut the gap to just two points.

He then kicked a penalty to put the Trailfinders 22-21 in front, and with Pirates’ discipline seeing two of their players sent to the sin-bin the hosts captailsed with another score before half time.

Sloan again smashed through the defence and found Cordy Redden on the wing who went through for his second, and put the hosts 27-21 in front at the break.

Ben Ward’s side continued their momentum in the second half and put the result beyond doubt with two early tries. Harry Sloan took advantage of Will Harries’ break to score acrobatically in the corner, O’Meara then got one back for the Pirates but Dave Johnston marked his return to the starting line up with a try to take the hosts over the 40 point mark.

Rayn Smid then scored the try of the match to spark wild celebrations from the supporters as he stole a lineout and then ran 60 metres whilst brushing past a number of defenders to crash over the line. May again added the extras as they neared the half century.

That landmark was reached in impressive style again as the hosts showed their expansive style with some scintillating rugby. Alun Walker’s audacious offload allowed Jordan Burns to complete his hat-trick on the 70 minute mark, and there was still time for one more try to round off a fantastic performance.

Burns got the ball on the half way line and once more used his pace to beat the Pirates defence and confirm an empahtic 58-26 win in the sunshine at Trailfinders Sports Club.

Details of the Cup Final will be confirmed in the coming days for the season-ending clash against London Irish.