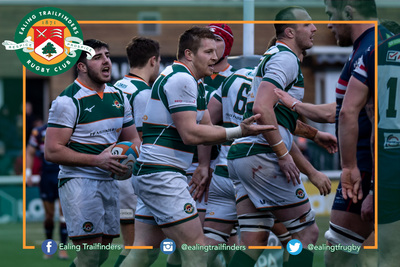 Ben Ward’s men trailed at the break and the visitors were still in front as we entered the final 10 minutes but late tries from Matt Cornish and Rayn Smid gave the Trailfinders a crucial win over the in-form Knights.

The hosts started in emphatic fashion and went in front after just seven minutes with a try from Kieran Murphy. A penalty was kicked to the corner and after the maul was brought down the ball was spread wide, allowing the back-rower to step his way to the line. Peter Lydon added the conversion to give his side a 7-0 advantage.

Another chance followed quickly as Lydon broke through the middle and had Will Harries alongside on the right wing, but the looping pass went in to touch and Doncaster got the lineout.

The Trailfinders wasted no time to score try number two, and crossed before the 20 minute mark to take control of the match. The Knights were going through the phases in the 22 but James Cordy Redden intercepted a pass and ran 80 metres to score in the corner. Lydon’s excellent conversion extended the lead to 14 points.

However that sparked Doncaster in to life and they responded with three tries before half time to take the lead.

A rolling maul powered towards the line which allowed Mike Mayhew to bundle over, and Kurt Morath’s conversion cut the gap to seven points.

Their second try came five minutes before half time as another maul from close range allowed Rory Pitman to score, and with the last play of the first half they went in front.

They had all the momentum and Tom James snuck over right under the posts to give them a clinical lead. Morath added a third conversion as they went down the tunnel 21-14 ahead.

The Trailfinders needed a big response in the second half and they pulled themselves level on the 50 minute mark as Kieran Murphy crossed for his second try. A penalty was kicked just short of the line and gave the hosts the platform to score, which allowed them to spread the ball wide to Murphy who dummied past the final defender. Lydon’s third conversion made it 21-21 with an intriguing half an hour ahead.

Both sides then looked to make their mark in the final quarter, and it was Doncaster who would go ahead with a penalty from Kurt Morath. Curtis Wilson was brought down just short but the referee went back for an earlier infringement, which allowed the fly-half to put his team ahead with 15 minutes remaining.

The West Londoners responded in impressive style to go in front straight from the re-start. They gathered the ball and then went wide straight away with Peter Lydon and Rayn Smid combining to go up to the line, and quick ball hit Matt Cornish on a great angle to smash his way over the line. Lydon’s conversion put the hosts four points ahead.

Rayn Smid then sealed the victory with five minutes left to ensure a huge sigh of relief around the ground. After a number of phases deep in the 22 the captain was there to power over from close range for try number five, extending the advantage to 33-24.

The hosts closed out the final two minutes and smashed the ball in to the stands, confirming a hard-fought victory to maintain their place in the top-two of the Greene King IPA Championship.