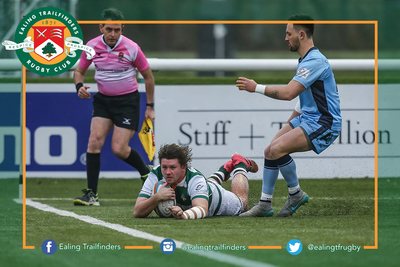 Ealing Trailfinders got back to winning ways after a five-try victory over London Scottish at Trailfinders Sports Club.

The hosts had to overturn a half time deficit but rallied strongly in the second half to ensure that they got their first win of the year courtesy of tries from James Cordy Redden, Rayn Smid, Matt Cornish and a double from Alun Walker.

The Trailfinders made an impressive start and played with real tempo in the opening stages as they looked to stamp their authority on the match. Harry Sloan broke through the middle and was brought down just short, but from the resulting penalty the ball was kicked to the corner and allowed Alun Walker to drive over the line from five metres out to open the scoring. Peter Lydon’s conversion went just wide but the hosts held a 5-0 lead after as many minutes.

However just as it looked as if the Green and Whites had made the ideal start, two quick scores from the visitors turned the scoreboard on its head with a quarter of an hour on the clock.

The Scots went through the phases on the half way line, and an inside ball opened up a huge gap which allowed Miles Mantella to race clear from 40 metres to dot the ball down. Rory Jennings added the extras to put them in front.

Just moments later they extended their lead after a Trailfinders lineout was over thrown and bounced up to the Scots. They instantly spun the ball wide and Tom Griffiths had the pace to run through the defence and slide over for their second try of the afternoon. Jennings again converted to put the visitors nine points in front.

Ben Ward’s side then began to dominate possession as they looked for a way back in to the match, and they were rewarded on the 20 minute mark as Alun Walker went over for his second try of the match. The hosts went through phase over phase deep in the 22, and the hooker carried from close range to bundle over the line. Peter Lydon converted to cut the deficit to just two points.

The hosts created a number of opportunities in the lead up to half time but were left frustrated as a number of knocks ons saw the chances missed. A rolling maul powered towards the line and just at the crucial moment the ball was popped in to Scottish hands, before Lydon broke through the middle but a last ditch tackle saw the Scots survive.

The Trailfinders couldn’t get over the try-line for the remainder of the opening 40, and went in at the break trailing by two points.

Scottish extended their lead straight away as Griffiths broke through again to run through from 40 metres, but the hosts responded when James Cordy Redden was the beneficiary of an overlap on the left wing to cut the deficit to just two points.

A lineout was stolen and straight away the ball was spun wide to the winger who dived in the corner as the Trailfinders got themselves right back in the match.

Ben Ward’s men eventually battled in front just before the hour mark as captain Rayn Smid went over for their fourth try after going through the phases in the 22, and Lydon’s conversion put them five points in front heading in to the final quarter.

Matt Cornish then put the result beyond doubt after powering over the line from close range with 15 minutes remaining for try number five, but the Scots refused to lie down and got a deserved try bonus point in the closing stages as Byron Hodge latched on to an offload to dive over the line.

That score meant that the lead was only five points with seconds left on the clock , but Lydon’s late penalty with the final play of the match ensured that the hosts registered a 34-26 win.