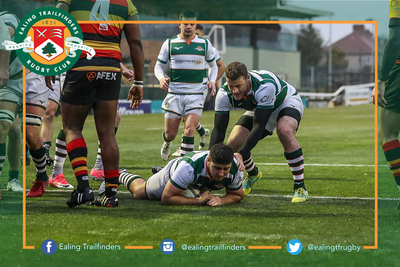 Ealing Trailfinders secured top seeding in the Championship Cup after an impressive 33-0 victory over Richmond at Trailfinders Sports Club.

Ben Ward’s side scored five tries in the torrential rain to make sure they will host a Quarter Final, rounding off the pool stages in outstanding fashion. A hat-trick from Matt Cornish as well as tries from Andrew Durutalo and Alex Lundberg gave the West Londoners the win.

In tricky conditions due to the wind and rain both sides opened the match with a number of errors as they got used to the weather, but the Trailfinders were first to cross the try-line on the 20 minute mark.

After a number of half chances, in particular when Ryan Foley and James Cordy Redden combined to break in the midfield the hosts went back to their reliable rolling maul to secure the first score.

A series of penalties from the dominant scrum took them inside the Richmond 22, and an enormous rolling maul from 20 metres out powered to the line, allowing Matt Cornish to break away and score. Craig Willis converted from the touchline to give his side a 7-0 lead.

Lorcan Dow was then sent to the sin-bin for the visitors after a number of infringements on their own try-line, but despite dominating possession the hosts were failing to convert the chances in to points.

A number of entries in to the Richmond 22 resulted in mauling opportunities but the visitors were holding firm and despite a second yellow card, this time for Timmy Walford they would stop the Trailfinders from crossing the line for the remainder of the first half, with the hosts going down the tunnel holding a 7-0 lead at the break.

The Trailfinders looked like a different team in the second half and came out full of energy which resulted in a try after just two minutes. A penalty took them up to the line, and Cornish was again at the back of a maul to power over for his second of the match. Laurence May converted to double the lead, and just 10 minutes later he would complete his hat trick.

In identical fashion a penalty was kicked to the corner, and the hooker steamed over the line to extend the advantage to 19 points.

With results going their way the Trailfinders knew that a bonus point try may well be enough to get top seeding, and they got their fourth try with just over five minutes remaining courtesy of Andrew Durutalo. The American flanker powered over from inches out to make sure they would get the full set of match points, and May converted to give the hosts a 26 point cushion.

In the final play of the game Alex Lundberg bundled over the line after a dominant carry, and May added the extras to secure a 33-0 victory at Trailfinders Sports Club.

That result means the Trailfinders will host a Quarter Final on the first weekend of February, with the opponents to be confirmed.