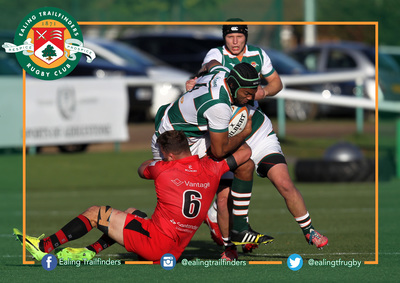 Ealing Trailfinders started the Championship Cup with a defeat after an eventful 34-41 loss to Jersey Reds at Trailfinders Sports Club.

Ben Ward’s men came away with two points after a late rally to secure a four-try bonus point as well as a losing bonus point with tries coming from Segundo Tuculet, Jake Ellwood, Ben Betts and Jordan Onojaife.

In uncharacteristic style the Trailfinders started slowly and trailed 12-0 after just 10 minutes. Jersey took the lead after Charlie Maddison drove over from a rolling maul deep inside the 22, and straight after Auguy Slowik intercepted a loose pass to race clear and give the visitors control of the match.

The West Londoners then woke up in the second quarter of the match and dominated for the remainder of the first half as they looked for a response. Segundo Tuculet’s try with 20 minutes on the clock brought his side back in to the game as the deficit cut to within one score. Sam Olver’s flat pass released the Argentinian down the left wing, and he had the pace to beat the final defender to score in the corner. Olver’s conversion closed the gap to just five points.

Olver then kicked a penalty to close the deficit even further, and the Trailfinders then went in front as Jake Ellwood powered over the line on the half hour mark. A scrum just five metres from the try-line gave the hosts front-foot ball, and they went through the phases to eventually allow the prop to score from close range. The successful conversion gave the Green and Whites a 17-12 lead.

The lead disappeared with the final play of the first half, as another rolling maul from inside the 22 allowed Nick Selway to break away for the Reds’ third try, but with the conversion going wide the sides went down the tunnel level at half time.

Jersey dominated the opening exchanges of the second half to put themselves in a strong position, as three tries in the third quarter of the game saw them pull away from the Trailfinders.

Yet another rolling maul allowed Charlie Beckett to rumble over the line for the first score of the half, and Brett Herron’s touchline conversion gave them a seven point advantage.

Leroy Van Dam then took advantage of another loose pass, the ball bounced in to his hands and he was able to run to the line from 70 metres out as the lead extended to 14 points. They then put the result beyond doubt as Mark Best scored in the corner from turnover ball, moving them 21 points in front with just 20 minutes to go.

The Trailfinders responded well and scored their third try of the match when Ben Betts battered his way to the line after sustained pressure in the 22, and the hosts began their quest for a bonus point as a consolation.

Jersey kicked another penalty as the clock kept ticking, but Jordan Onojaife then scored the fourth try for the hosts to ensure they didn’t leave the game empty handed. The Trailfinders were going through the phases and edged their way towards the line, before the second-rower gathered just inches away to dot the ball down.

Olver converted, and with the last kick of the game he kicked a vital penalty from 40 metres out to ensure that his side registered two crucial bonus points in a dramatic Cup opener.

The West Londoners head to the Athletic Ground to face Richmond next Saturday as they go in search of their first win in the newly formed competition.