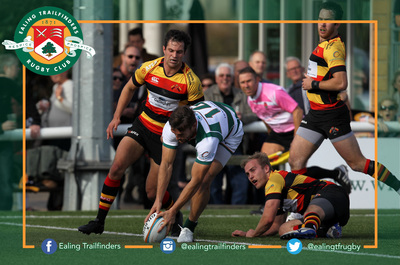 Ealing Trailfinders moved to the top of the Greene King IPA Championship table after a 38-32 victory over Richmond at Trailfinders Sports Club.

As has been the case for the most of the campaign the Trailfinders raced in to an early lead and scored three tries in the first quarter, with the first one coming after just five minutes.

A penalty was kicked to the corner as the West Londoners went in search of the first score, and with the maul powering towards the line the ball was spun straight to Rayn Smid who was never going to be stopped from just two metres out. Craig Willis converted in blustery conditions to give his side a 7-0 advantage.

Two chances then passed by as Segundo Tuculet broke through the middle but a knock on gave the ball back to the visitors, before a kick in behind was chased down by James Cordy Redden but an unfortunate bounce meant the ball went dead.

The next opportunity was then taken as Cordy Redden continued his try-scoring run on the 15 minute mark. Scrum-half Ryan Foley stepped to the right from the breakdown and his disguised offload inside allowed the winger to race straight clear from outside the 22 to dive under the posts. Willis again converted to put the Trailfinders 14 points in front.

That lead was then extended to 21 points as try number three followed straight away. Jordy Reid made a powerful break through the middle and with quick ball Craig Willis grubbered in behind for Seb Stegmann to score in the corner.

However Richmond then responded with two tries in quick succession to bring themselves back in to the match. Rob Kirby stepped his way to the line to get their first points of the afternoon and then Will Goodrick-Clarke drove over from close range to cut the Trailfinders’ lead to seven points.

Two tries in the final minutes before half time gave the Trailfinders a comfortable lead and also secured the bonus point in the process.

A penalty was kicked to the corner, and in trademark fashion Alun Walker broke off the maul to score the fourth try to the delight of the 912 in attendance.

The fifth try came seconds after as Elliot Millar Mills powered through the Richmond defence to take play inside their 22, and then the ball went through the backs to find Stegmann for his second try of the match. The conversion was just wide but the hosts now had a 31-14 lead.

With the final play of the half Richmond crossed for their third try as they ended the opening 40 minutes strongly. They had a scrum deep in the 22, and from the set play they found Jordan Simpson-Hefft who scored in the corner to cut the gap to 12 points at the break.

Richmond’s Will Goodrick-Clarke was sent to the sin bin early in the second half and the Trailfinders made the most of it to extend their advantage. After going through the phases the hosts had the ball right on the Richmond line, and Craig Willis stepped his way past three defenders to sneak his way to the line.

Another opportunity followed as Tuculet again showed his quick feet to create a two-on-one on the right wing but a knock on meant Richmond escaped.

On the hour mark Richmond rallied as they looked for a late comeback and Tim Walford tapped a penalty quickly to take the defence by surprise and score from close range. With the clock ticking away they then got their fifth try with Chris Davies driving over from a maul to cut the lead to just nine points. Crucially the conversion went wide, meaning they needed two scores in the last two minutes.

A big set of defence stopped Richmond from crossing again, however with the last play of the game Rob Kirby earned them a losing bonus point with a penalty from in front of the posts.

That signalled the end of the match, and the home supporters celebrated a sixth win in a row as the Trailfinders moved to the top of the league with Coventry heading to Vallis Way next weekend.