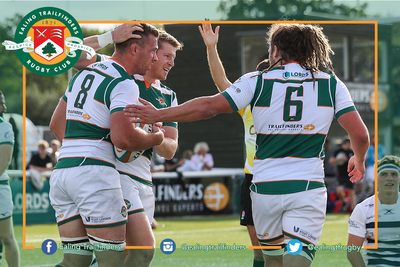 Ealing Trailfinders made it back-to-back wins with an emphatic 42-24 bonus-point victory over Yorkshire Carnegie at Trailfinders Sports Club.

Ben Ward’s men scored five tries thanks to a double from Rayn Smid as well as scores from James Cordy Redden, Pat Howard and Jordy Reid to get their second consecutive victory.

The West Londoners flew in to the lead with a try from captain Smid after just two minutes. Peter Lydon broke through the middle and after being brought down just short the ball was recycled to the South African who powered over from close range. Lydon converted to give his side the perfect start.

The Trailfinders were then denied a second try by the TMO after an outstanding spell of play saw them nearly cross for a memorable score. A number of offloads in the midfield saw the Carnegie defence running in circles, but a knock on in the process of scoring saw play brought back for a scrum.

It didn’t take long however for the next try, with Smid going over for his second on the 10 minute mark. Craig Willis’ flat pass gave Lewis Jones an acre of space in the midfield, and he was haule down five metres from the line but Smid was there to dive over. Lydon’s conversion was again successful to double the lead.

James Cordy Redden then went over for the third try with 18 minutes on the clock as the Trailfinders threatened to run away with it. An offload from Lewis Jones set Pat Howard free down the wing, and despite scramble defence bringing him down, Cordy Redden was on his shoulder to go over from close range. The conversion went wide, but the hosts held a dominant 19-0 advantage.

Yorkshire responded well and got themselves back in to the match as they dominated the second quarter. Ben West was sent to the sin bin for bringing down a maul, and then from the resulting penalty they went over courtesy of Dylan Donnellan who drove over from the maul. Brendan Cope converted to cut the lead to 12 points.

The Trailfinders re-gathered their composure and a penalty from Peter Lydon extended the advantage to 22-7 which was then cancelled out by a Cope three-pointer for the visitors, and that was how the score remained until half time after an energetic opening 40 minutes in front of 933 in Ealing.

The first score of the second half was always going to be crucial, and to the delight of the home supporters it came from Pat Howard who secured the bonus point in the process. The ball came off the top of the lineout and found Andrew Durutalo who made a characteristic run through the defence, before drawing in the last man to release Howard who ran clear from outside of the 22. Lydon converted, with the lead now 27-10.

Yorkshire were next to score as former Trailfinder Dan Temm ran over from loose ball to cut the deficit. They turned the ball over from inside their own 22 and broke away, before the flanker gathered with an overlap to dive over in the corner. Cope’s touchline conversion brought them back to within 12 points with 15 minutes remaining.

Man of the Match Jordy Reid then put the result beyond doubt with a try on the 70 minute mark to the relief of the home crowd. A neat play inside the 22 took the hosts right up the line, and the Australian picked a great support line to bundle his way under the posts. Lydon converted to take the Trailfinders up over the 30 point mark.

Yorkshire then got their bonus point with three minutes left as Brendan Cope went over from close range after another long distance break, but Lydon rounded off the scoring with two more penalties to give the hosts a confidence-boosting 42-24 victory.