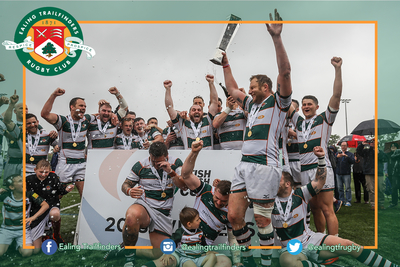 Ealing Trailfinders won the British & Irish Cup for the first time with a historic 22-7 victory over Leinster at Vallis Way.

In what were extremely challenging conditions the West Londoners managed the game impressively and took control of the match in the second half thanks to tries from Joe Munro and Mark Bright.

Luke Daniels opened the scoring after a cagey opening to give Ben Ward’s men the lead on the 15 minute mark, but Leinster responded straight away to take the lead.

A penalty from the restart allowed them to kick to the corner, and they drove over the line from the rolling maul to score the first try of the match. Ciaran Frawley’s conversion gave the Dublin outfit a 7-3 advantage.

The first half remained a nervy encounter, but after securing dominance up front the Trailfinders took the lead just before the break. A series of scrums on the Leinster line meant they were awarded penalty after penalty, and eventually after the ball spat out of the side it allowed Luke Carter to dive over the line. Daniels converted, and gave his side a 10-7 lead at the break.

The West Londoners dominated the second half and were winning the battle at the breakdown as the match turned early in the final 40 minutes in their favour.

Leinster had two men sent to the sin bin in quick succession, and from there the Trailfinders scored two quick tries to put them in firm control.

Joe Munro gave his side some breathing space with an outstanding try after 57 minutes. The ball came off the top of the lineout and he combined with James Cordy Redden, whose audacious offload allowed the big centre to smash his way over the line. Daniels converted to open up a 10 point lead.

That lead was then extended when Mark Bright scored just two minutes later to put the result beyond doubt. A maul was brought down just short, but the captain picked the ball up from close range and stepped the final defender to send the Vallis Way crowd of 1386 in to raptures.

From then on the half backs of Luke Carter and Shane O’Leary continuously kicked in to the Leinster territory to ensure there was no danger on the try-line in the closing stages, and the Trailfinders held out for a memorable victory which was met with jubilant scenes all around Vallis Way.