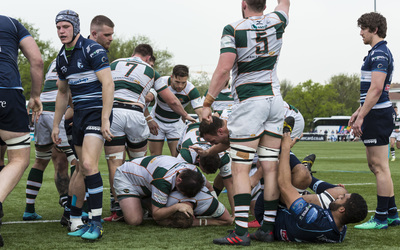 Ealing Trailfinders booked their place in the British & Irish Cup Final after an emphatic 36-16 victory over Bedford Blues at Vallis Way.

The West Londoners were scintillating in the first-half and raced in to a 26-6 lead after just 25 minutes after tries from Piers O’Conor, Alun Walker, Luke Carter and Harry Casson.

Mark Bright then added another five-pointer after the break to put the result beyond doubt in front of 1027 in the sunshine.

Will Hooley’s early penalty gave the visitors a 3-0 advantage with five minutes on the clock, but from then on the game was dominated by the hosts.

Piers O’Conor opened the scoring after 10 minutes, after a break from inside the 22 saw James Cordy Redden race down the wing and then pass inside to the centre who ran clear to slide over the line. Luke Daniels converted to edge his side ahead for the first time in the match.

Hooley then kicked another penalty, but then Ben Ward’s men turned the screw to put one foot in the final with a spell of three tries in five minutes.

Alun Walker went over the line from a rolling maul after a huge touch find from Shane O’Leary, and with Daniels’ conversion the lead was now eight points.

Then the hooker showed incredible skill to dummy and step past three defenders before offloading to Luke Carter who carried over from five metres out.

Straight from the restart another try had the home supporters in raptures as the hosts scored again. Carter broke from gathering the drop kick, and had Harry Casson there on his shoulder who was able to beat the last man to dive over. Daniels converted, and all of a sudden the Trailfinders had a 26-6 advantage.

That lead was nearly extended further again as Dan Temm broke down the wing, but his pass inside went forward and Bedford were able to end what had been a relentless 10 minute period.

Hooley kicked another penalty just before the break, but the hosts held a commanding 26-9 advantage at half time.

The Trailfinders showed no signs of letting off in the second-half, with Mark Bright going over for the fifth try of the match to all but book his team’s place in the final. Another huge O’Leary touch find took them up to the line, and then the captain drove over from the rolling maul to mark his 50th appearance for the club with a try. Daniels’ conversion took the lead up to 24 points.

Bedford then responded as they looked for a way back in to the match, but the home defence held firm to deny them any momentum.

Joe Munro went within inches of scoring after being dragged down just short, and then the visitors were reduced to 14 men when Will Carrick Smith was red carded for a headbutt.

Mike Rayer’s man went over for a consolation try as Michael LeBourgeois scored under the posts from first phase ball, but a Luke Daniels penalty rounded off the scoring with a 36-16 victory.

Ealing Trailfinders will now face Leinster in the Final on the weekend of 12th May, with the location and date to be confirmed in the coming days.