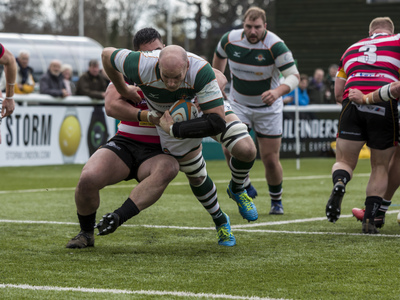 Ealing Trailfinders advanced through to the semi-finals after a nail-biting 28-25 victory over Cornish Pirates at Vallis Way.

The West Londoners held on in the closing stages as two late tries from the Pirates brought them back in to the match, but they managed to stop the onslaught and qualify to take on Bedford Blues in the semi.

After a tight opening to the match which reflected the significance of the game, Sam Dickinson opened the scoring with a try from close range.

A five metre lineout was brought down, and the second-rower broke away to rumble over the line to score his first try for the club. Luke Daniels, who was 100% from the tee all afternoon converted to put his side 7-0 ahead.

Will Cargill got the Pirates on the board with a penalty from 25 metres, but a try from James Cordy Redden gave the hosts some breathing space on the 20 minute mark.

Lewis Jones broke through the defence, and an impressive offload gave the winger a free run over the line to dive under the posts. Daniels again converted, extending the lead to 14-3.

In challenging weather conditions both sides were kicking the ball at every opportunity, and the Pirates came back in to the match just before the break to cut the gap to just a point.

Marlen Walker scored their first try of the match with five minutes until half time after the ball landed in his hands from a lineout, and Cargill’s conversion made it 14-10. Another penalty from the fly-half with the final play of the half made it 14-13 at the break.

Just like last week the Trailfinders came flying out of the blocks in the second half, and two early tries put them in control of the match.

Luke Daniels read a long looping pass and intercepted before racing clear from 50 metres just seconds after the restart, and he converted his try to extend the advantage to 21-13.

Just two minutes later captain Kieran Murphy scored the fourth try to edge further ahead. After going through the phases deep in the Pirates 22 the ball found the skipper who smashed his way through the last defender to score. Daniels converted, making it 28-13 with half an hour remaining.

The Pirates’ comeback began in the 68th minute as Matt Evans broke through three defenders to give himself a clear run to the line, and with the conversion there were just eight points in it.

That gap was cut to just three points with another try to increase the tension at Vallis Way. A five metre lineout gave the visitors the platform, and Billy Keast drove over to score. The conversion crucially went wide, meaning there was more than just a penalty between the sides.

Ben Ward’s side kept the ball for the final two minutes as they looked to run down the clock, however a knock on gave the Pirates one last chance. However the ball was dropped, meaning the crowd erupted and celebrated a passage through to the semi finals.