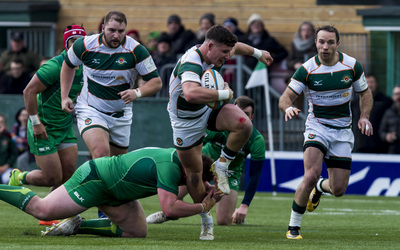 Ealing Trailfinders stormed their way to the British and Irish Cup Quarter Finals with a 78-12 victory over Connacht at Vallis Way.

Ben Ward’s side scored twelve tries in a relentless attacking display as they booked their place in the knockout stages with a big win over the youthful Irish outfit.

A hat-trick from Will Harries as well as scores from Miles Mantella, Alun Walker, Joe Munro, Morgan Allen, Dan Temm, Rhys Lawrence, Lewis Jones and a double from Luke Carter saw the hosts record their most rampant performance of the campaign so far.

It was Connacht who started strongly and took an early lead after Adam Leavy found space on the left wing, but that was to be as good as it got for them as the Trailfinders hit back emphatically.

Miles Mantella got the hosts on the score board after a long range kick from Luke Daniels bounced up perfectly for the winger who had the pace to beat the defenders and dive over the line. Just five minutes later the West Londoners took the lead as Alun Walker continued his impressive scoring form to stroll over the line in the corner. Rayn Smid drew in the last defender before allowing the Scot to dot the ball down.

The try bonus-point was then secured in quick succession as a Will Harries double ensured the full five points. It was again Smid who made the dominant carry and released the Welshman to run in unattended, and just three minutes later Harries pounced on a loose ball inside the 22 to score from close range.

There was still time for one more try in the first half and it was the best of the lot as Lewis Thiede broke away straight from the restart before passing to Luke Carter who raced away from the defenders and showed brilliant pace to run clear from over 50 metres out. Daniels converted to give the hosts a 31-7 lead at the break.

The Trailfinders showed no signs of slowing up in the second half and started in similar fashion, with Joe Munro bundling over from close range just two minutes after the restart to extend the lead further.

Carter got his second of the match just before the hour mark as a huge break from Storm Man of the Match Kieran Murphy took him right up to the line, and the scrum-half dummied to dot down from just a metre out.

Will Harries then completed his hat trick and brought up the 50 point mark with the try of the match ashe chipped over the top of the defence and gathered his kick to score a try of the season contender.

Morgan Allen used all of his strength to crash over the line after a strong carry from Munro gave the Welsh number eight some space to run in to as he went over for the ninth try of the afternoon.

Connacht responded with a consolation try from Stacey Ili as the clock ticked towards the 65 minute mark. Rory Scholes found space out wide and passed to Ili who carried over the whitewash.

There was still time for the Trailfinders to put even more gloss on the scoreboard as they registered three more tries in the final 10 minutes.

Dan Temm’s quick thinking saw him take advantage of a quickly-taken lineout and use his pace to run around the outside of the defence to the try-line, and just minutes later a a smart one-two at the front of a lineout saw Rhys Lawrence squeeze over as an intelligent move took the defence by surprise.

Lewis Jones rounded off the scoring with a long-range try in the final play of the match as he beat a number of defenders on the way to the line from 40 metres out. Daniels’ final conversion ensured that the score ended 78-12 to the hosts.

Ben Ward’s men now head to the Athletic Ground to face Richmond next weekend as the pool stages come to a close in Round Six.