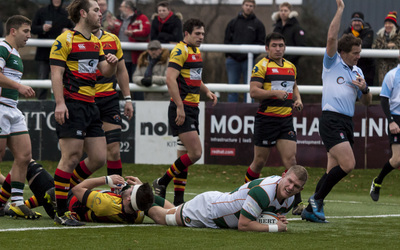 Ealing Trailfinders stormed their way to a victory over Richmond, scoring six tries in a 40-24 at Vallis Way.

In a scintillating first half display Ben Ward’s men raced in to a 40-5 lead at the break with impressive tries from Mark Bright, Barney Maddison, Piers O’Conor, Seb Stegmann and a brace from Alun Walker.

However the visitors responded in the second half and kept the Trailfinders out as they put in a spirited final 40 minutes.

In a frantic start where the hosts scored three times in the first 15 minutes, Mark Bright opened the scoring with just 180 seconds on the clock. A number of phases took the Trailfinders in to the Richmond 22, and Bright saw a gap from the base of the ruck to run through unattended under the posts. Luke Daniels converted, giving his side a 7-0 advantage.

That lead was then doubled just two minutes later, with Barney Maddison getting on the score sheet. Seb Stegmann made a scintillating break from inside his own 22 which took him to within five metres of the line, and when the ball was recycled it allowed Maddison to smash his way over from close range.

Piers O’Conor got the third on the 15 minute mark with the outstanding try of the match. Straight from the top of a lineout the ball was spun to Luke Daniels who raced clear, and drew in the last defender to allow O’Conor a clear run to the line in the corner. The conversion was just wide, but the hosts had a commanding 19-0 advantage.

Alun Walker then secured the bonus point try before the half hour. More patient build up play took Ben Ward’s men up to the line, and the hooker dummied to allow him a clear run as he dodged the last of the Richmond defence.

Richmond responded straight away to cut the deficit. Ealing were hammering away at the line, but Luc Jones intercepted and ran the length of the field to score their first try of the game.

There was still time for another two tries before the break, with Walker scoring his second with 32 minutes on the clock. A five metre lineout gave the hosts the perfect platform, and with the maul rolling towards the line the hooker broke away to score. Daniels’ conversion extended the lead to 33-5.

Seb Stegmann joined the party with the sixth try ahead of half time. With some loose ball in the midfield, O’Conor fizzed a looping pass to the winger who ran clear in the corner. Daniels again converted, giving the Trailfinders a 40-5 lead at the break.

With a comprehensive lead at the break the hosts were unable to replicate their first half display in the second half and it was Richmond who enjoyed the majority of possession in the final 40 minutes.

They struck first in the second half with a try from Jono Woodward on 42 minutes. A wide pass after a number of phases on the line found Woodward in acres of space, and he ran in to the try-line to cut the deficit to 40-10.

Will Harries had a chance out wide as he gained space outside the 22, but after storming towards the line he was dragged down by the scrambling visitors’ defence.

Richmond struck again on the hour mark for their third try of the afternoon, with Rob Kirby spotting a gap straight through the middle to run clear from inside the 22.

Joe Munro then powered through the defence with a typical big carry, but he had no support and the ball was turned over.

With the last play of the match Richmond got their four-try bonus point, as Jesse Liston was the beneficiary of a strong carry to bundle over.

The result means that the Trailfinders stay second in the Greene King IPA Championship, however they will be looking for a more consistent display with the trip to Bedford next weekend.