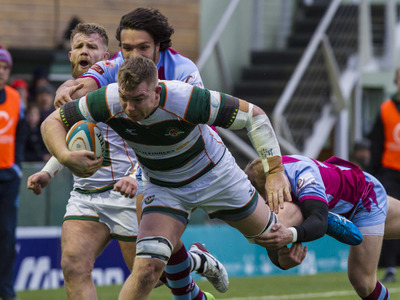 Ealing Trailfinders made it four wins from four in the British and Irish Cup with a 35-19 bonus-point victory over a spirited Rotherham Titans at Vallis Way.

In an error-strewn match due to the adverse weather conditions it was the hosts that were able to secure the victory with tries from Grayson Hart, Kieran Murphy, Lewis Robling, Morgan Allen and Arthur Ellis.

The Titans crossed the line on three occasions with Charlie Maddison, Ben Foley and Jonny Murphy getting on the scoreboard for the much improved Rotherham outfit.

Grayson Hart opened the scoring after just seven minutes to put his side in front. A five metre scrum gave the West Londoners a perfect attacking position, and Hart was able to bundle over from close range to score for the second consecutive week. Peter Lydon, who was 100% from the tee converted to edge them 7-0 ahead.

The hosts were playing with real intent in the early stages and kept the intensity high, which was shown when captain Kieran Murphy scored an impressive try on the 20 minute mark. James Cordy Redden gathered a high ball before passing inside to Arthur Ellis who smashed his way through the defence and drew in the last man, allowing Murphy to run through in the corner.

Lewis Robling then scored the third try after a quick dart down the short side caught the defence off guard and allowed the centre to run clear from outside the 22. The conversion extended the lead to 21-0 on the half hour mark, and there was time to secure the bonus point before the break.

Morgan Allen gathered the ball from the base of a five metre scrum, used his power to break through the defender and bundle over the line from close range.

Rotherham responded before half time and got a deserved try with the last play of the half. A five metre lineout then turned in to a maul which powered towards the line, and Charlie Maddison broke away to score their first of the match. Lee Millar’s touchline conversion meant that his team went down the tunnel trailing 28-7.

Andy Key’s side dominated possession and territory in the second-half, and got the first score of the final 40 minutes with half an hour remaining.

The hosts had the ball but it was ripped away from them and Ben Foley was the beneficiary, with a clear run to the line from half way to dot down.

The Trailfinders replied straight away with a score from Arthur Ellis to put the West Londoners over the 30 point mark. The flanker got the ball 30 metres from the line, and stepped a number of defenders on his way to one of the standout moments of the match. The conversion meant that they had a 35-12 lead before the heavens opened with torrential rain at Vallis Way.

Aaron Penberthy saw a chance pass him by after the ball spilled out of a scrum but the ball wouldn’t sit up for the fly-half as it fell in to a Rotherham hand.

The Titans were rewarded for their endeavour with a try on 75 minutes to round off the scoring. Lee Millar’s chip over the top was gathered by Jonny Murphy who had a clear run to the line from 20 metres out.

The Trailfinders now turn their attention back to Championship action, with a local derby against Richmond at Vallis Way next Saturday promising to be a great occasion.