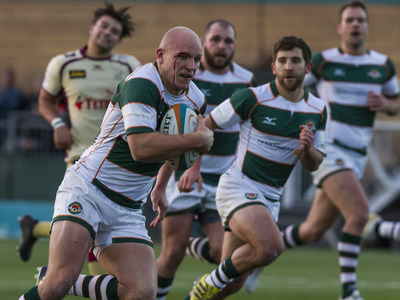 Ealing Trailfinders got back to wining ways with an emphatic 57-14 victory over Doncaster Knights at Vallis Way.

Ben Ward’s side scored eight tries in a brilliant display, where they showed impressive intensity throughout to record a huge win.

Luke Daniels, who was on kicking duty and kicked brilliantly throughout opened the scoring with a penalty in the third minute to give the Trailfinders an early lead, however it was the Knights who responded and went in front.

A turnover gave the visitors a good attacking position inside the 22, and a grubber in behind allowed Charles Foley to gather the ball and dive over the line. Dougie Flockhart converted, putting his side 7-3 ahead.

However the Trailfinders didn’t look back and powered their way in to the lead, and once they had it they never sacrificed it as the performance went from strength to strength.

Alun Walker bundled over the line from a rolling maul on the 12 minute mark to put the West Londoners back in front, and the conversion from Daniels edged them 10-7 ahead.

The remaining 30 minutes of the first half was then controlled by the Trailfinders who stormed their way in front. Kieran Murphy marked his return to action with an outstanding score to give the hosts some breathing space.

Straight from the top of a lineout the ball was spun straight to the flanker, who smashed his way through the middle of the defence and had the pace to dive over unattended. Daniels’ conversion extended the lead to 10 points, and that was to be increased just five minutes later.

James Cordy Redden scored his first of the afternoon to put the Green and Whites 24-7 in front. A turnover gave the Trailfinders front foot ball, and Rayn Smid carried towards the Doncaster 22 before unleashed the winger who used his pace to race clear down the touchline and score in the corner.

The bonus point was secured before half time, with Lewis Jones marking his first Championship start of the season with a try to ensure of the extra point. Rory Clegg took the ball up to the line after drawing in a number of defenders he popped the ball to Jones who had a free run to the line from just outside the 22. That score meant that the West Londoners had a convincing 31-7 lead at half time.

Ben Ward’s men showed no signs of slowing down in the second half, and started with another try from Lewis Jones who was on his way to the Storm Man of the Match Award. A turnover gave the Trailfinders the ball underneath their own posts, but they showed huge ambition by playing from deep. Joe Munro’s looping pass found Cordy Redden on the wing who ran up to the half way line before passing to Jones who had the pace to run clear from 40 metres and dive over the line. Daniels, who missed just one kick all afternoon converted to extend the lead to 38-7.

Rayn Smid got on the scoresheet just before the hour mark as the hosts continued to dominate. An overlap gave them a two on one on the wing, and Murphy drew in the final man before allowing Smid to run to the line and dive over in the corner.

Doncaster then began to gain some of the ascendancy in the final quarter and went over for a consolation try with 12 minutes left on the clock. After a number of phases in the 22 the ball was spun to Cameron Cowell who used his footwork to find the try-line after evading a number of tackles.

There was still time for Ealing to respond, and they rounded off the afternoon with two late tries to add some gloss to the scoreboard.

A turnover in the Doncaster 22 saw the ball spill out of the ruck, and it was Matt Cornish who was first to react which allowed him to race through the middle and slide under the posts. That brought up the 50 point tally to the delight of the supporters.

Smid then got his second of the match with two minutes left. From the base of a scrum inside the Doncaster 22 the South African used his strength to bulldoze his way to the line and round off the scoring.

The final whistle was met with loud cheers after an impressive 57-14 win, a victory which cements the Trailfinders’ as second in the Championship table ahead of next Saturday’s trip to Hartpury.