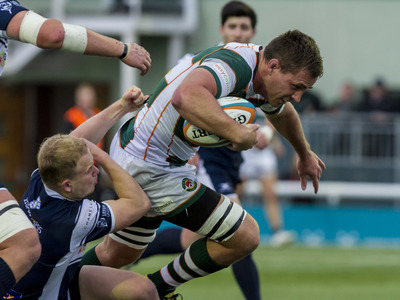 Scores from Peter Lydon, Will Harries and Piers O’Conor as well as a double from man of the match Rayn Smid meant that the Trailfinders stay second in the Greene King IPA Championship after a deserved win.

The hosts got off to a fast start, and with eight minutes on the clock Peter Lydon got the first try of the afternoon. With a free ball from a penalty advantage, the ball was spun wide and Lydon sprinted over in the corner. His first of five conversions gave his side a 7-0 lead.

Just two minutes later the lead was doubled, as Will Harries scored for the fourth consecutive match. The Welshman found space, and a dummy fooled the defenders before he was able to use his pace to race outside Chris Elder and dot the ball down.

The visitors responded strongly and got straight back in to the match with a penalty try to cut the deficit to just seven points. The referee lost patience with the Ealing pack after a number of infringements and eventually went straight under the posts to give the Leeds outfit their first points of the match. Harry Casson was sent to the sin-bin, meaning Ben Ward’s men were also reduced to 14 men.

However despite being a man down the hosts were galvanised, and extended their lead with a penalty from Lydon before Rayn Smid went over the line by crashing his way through the defence from close range. The conversion meant that Ealing held a 24-7 lead on the half hour mark.

Carnegie ensured that they got back in the match just before the break with a try from Chris Elder on 34 minutes. Stevie McColl put the winger in space, and he finished well to cut Ealing’s half time lead to 24-14.

Lydon edged that lead to 27-14 with a penalty three minutes in to the second half, and in what was a more cautious second half display with the defences on top it was the visitors who would strike next.

With 15 minutes remaining Elder got his second of the match after a cut out pass in the 22 gave him space on the wing to dot down in the corner. The conversion went wide, and Lydon then responded with his third penalty to extend the lead to 30-19. After a number of phases on the Carnegie line the hosts were in search of the try bonus point, but when given a penalty they opted for the three points.

The valuable bonus point did arrive with just over five minutes remaining, as Rayn Smid’s second try of the match ensured the maximum tally from the game. The flanker beat his defender with a strong carry to run through from outside the 22 to dive over for the fourth try.

The score-line looked even more attractive with Piers O’Conor scoring with two minutes left to take the hosts over the 40 point mark. From a lineout a flat pass allowed the centre to get over the gain line and he used his pace to race away and dot the ball down. Lydon’s conversion meant the West Londoners ended with a 44-19 win.

With a confidence boosting victory, the Trailfinders now sit eight points clear in second ahead of next Sunday’s trip to Nottingham.