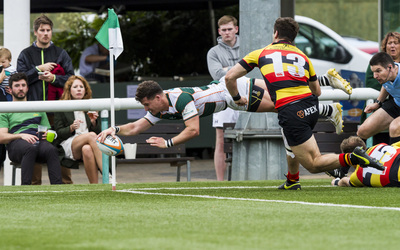 Ealing Trailfinders got the 2017/18 British and Irish Cup off to the perfect start with a dominant 67-12 win over Richmond at Vallis Way.

Ben Ward’s side scored eleven tries and showed their attacking quality to begin the competition with a bonus-point win.

Four players crossed for two tries each, with a strong team effort giving the home crowd plenty of reason to celebrate.

It took just two minutes to break the deadlock with James Cordy Redden racing clear after a neat offload from Arthur Ellis, and it was the flanker who was next to score from close range after a number of phases near the try-line.

Luke Daniels crossed for a brace before half time to mark his first appearance of the season with two tries. The full-back showed great feet to beat the last defender for his first, before the ball was spun wide and he acrobatically dived in the corner to dot down impressively.

Storm man-of-the-match Will Harries also went over before the break with a long-range effort after a brilliant backs move to give the hosts a 29-0 lead at half-time.

Cordy Redden started the second half in the same fashion as the first half with a try after just three minutes. Harries made a break on the outside, and the ball was then recycled and the winger was on hand to run in unattended.

Harries then also got his second to put the West Londoners 39-0 up. Another backs move from the base of a scrum ended up in the Welshman’s hands, and he had enough pace to step the defender and score.

Richmond responded with a well-worked try of their own to get on the scoreboard through Luke Outhwaite, but Ealing scored two in quick succession to continue their dominance.

The first came from Lewis Jones straight from the re-start, with Lewis Robling gathering the ball and then passing to his centre parter who ran through to score.

Robling went over just two minutes later for try number nine of the afternoon. Debutant Shane O’Leary took the ball to the defence and then offloaded for Robling to stroll under the posts.

Richmond got their second with Ben Rath having the pace to run clear after a chip over the top from James Swan which cut the deficit to 53-12 on the hour mark.

There was still time for Alun Walker to come on and cross the line for two tries to round off the scoring.

The Scottish hooker continued his try-scoring form with two close range scores after a number of phases near the line, and O’Leary converted both to make the final score 67-12 before next weekend’s trip to Connacht in Round Two.

Storm Man of the Match: Will Harries