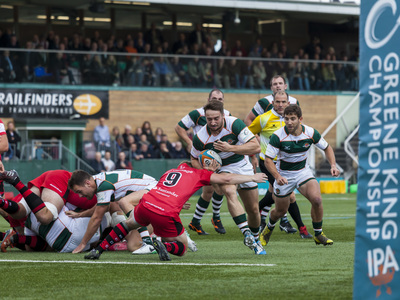 Ealing Trailfinders got back to winning ways with a comprehensive 31-8 victory over Jersey Reds at Vallis Way.

The hosts dominated the match but lacked a clinical edge, however a 78th minute try from Peter Lydon secured a valuable bonus point to stay second in the Greene King IPA Championship.

Other scores from Alun Walker, Miles Mantella and Andrew Durutalo ensured that the West Londoners took the maximum points.

In a match which both sides failed to play with a huge amount of intensity due to a high error count, it was Ben Ward’s side who started strongly.

Alun Walker drove over the line from a rolling maul to score for the fifth consecutive match to give the hosts an early 7-0 lead after Lydon’s conversion on eight minutes.

Brendan Cope cut the deficit to 7-3 with a penalty from outside the 22, and the Jersey defence held firm until just before the break.

The hosts had a number of chances to extend the lead but the final pass wouldn’t stick as the opportunities passed by. Seb Stegmann made a break down the left wing, and the ball was spun inside to Piers O’Conor who was over the line but the ball juggled and was knocked on.

It looked as if Jersey would head in to half time trailing by just four points, but a try from Miles Mantella with the last play gave Ben Ward’s side breathing space.

A break out wide from Andrew Durutalo gave Ealing front-foot ball, and the ball was recycled to Mantella who dived over the line in the corner.

Lydon kicked a penalty four minutes in to the second half to extend the lead to 17-3, and Andrew Durutalo then scored his fifth try of the season to give his team a commanding advantage.

The American international drove over from close range under the posts, and Lydon converted to put the hosts 24-3 in front.

Ealing were chasing the bonus point and were guilty of over-playing at times with a number of handling errors, but they breathed a huge sigh of relief with just two minutes remaining as they finally went over for their fourth try.

Calum Waters took a quick tap penalty and raced away from the defence, before passing to Lydon who beat the final defender to dot down over the line.

There was still time for the re-start, and Jersey had the final word with Tom Pincus crossing the line with the final play of the match to give the Channel Islanders a consolation try.

That result means that the Vallis Way side have recorded 25 points from their first six Championship matches, and sit in second place before starting the British and Irish Cup campaign against Richmond next Saturday.