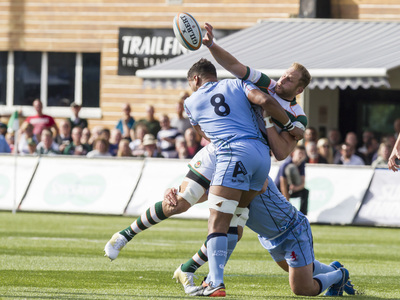 Ealing Trailfinders scored 10 tries in a superb attacking display as they moved back to the top of the Greene King IPA Championship table with a 72-12 victory over London Scottish at Vallis Way.

Ben Ward’s side scored some fantastic tries as they put out a huge statement with their best performance of the season so far against the Exiles.

The first try of the afternoon came courtesy of Miles Mantella with five minutes on the clock. A long looping pass from Jake Sharp was read superbly by the winger, who intercepted and raced clear from the half way line to score. Peter Lydon’s first of six conversions gave his side an early 7-0 lead.

Four minutes later Lydon, who was voted Storm Man of the Match scored his first try for the club to extend the advantage. Joe Munro made some valuable metres in the midfield, and the ball was spun wide to the Irishman who picked a great line and ran through unattended.

London Scottish responded straight away and got back in to the match with a try from Craig Holland. Some neat hands with a number of offloads drew in the defence, and resulted in an overlap on the right wing which allowed Holland to dive over in the corner.

Alun Walker then scored for the third consecutive match to put the hosts back in control on the 20 minute mark. A penalty was kicked to touch and gave Ealing a five metre lineout, which drove towards the line and saw Walker break away to score.

Lydon extended the lead to 24-7 with a penalty, before Piers O’Conor continued his try-scoring form with another five pointer before the break. It was again his centre partenr Munro who was making metres in the middle, and with the ball recycled by the try-line O’Conor showed some neat footwork to step his defender and dive over the line.

That score secured the try bonus-point, and ensured that Ealing went in to half-time with a comfortable 31-7 lead.

Andrew Durutalo got the second half off to a flying start with a try on 44 minutes to widen the gap further. With the ball coming straight off the top of a lineout it found its way to the American international, who bulldozed his way through the defence and raced away from outside the 22 to score under the posts.

Club Captain Mark Bright then got the sixth try of the afternoon from a rolling maul, with it driving towards the line he managed to navigate his way to the try-line for a trademark score.

Two former Ealing players then combined well for the second Scottish try of the match. Alex Walker took a quick penalty, and after being hauled down just short it was spun to Danny Kenny who offloaded to Matt Eliet  who was able to drive over the line from close range and cut the gap to 48-12.

With the bench then coming on and making a huge impact, the final 20 minutes were all about the hosts who showed their attacking capabilities with four more tries.

Rayn Smid dotted down after a brilliant one-two from Grayson Hart and Seb Stegmann on the fringes of the ruck opened up a huge amount of space for the back-rower to run through to the line to bring up the half century of points.

James Gibbons registered try number eight after bundling over the line from the fringes of a ruck, after an excellent offload from Lewis Robling on the wing to keep the move alive.

Seb Stegmann scored arguably the pick of the tries with a minute remaining. Aaron Penberthy’s perfectly measured cross-kick found the winger in the corner, and he stepped inside to fend off a number of defenders to score.

Aaron Penberthy’s first try of the season rounded off the scoring with the final play of the match. The Scots were looking to have the final say, but a pass was intercepted by Penberthy who ran clear from half way and marked the score with a jubilant dive over the try-line. The conversion went just wide, but the home fans were all celebrating a mightily impressive 72-12 victory.

Ben Ward’s men head to Bristol next Sunday in a top of the table clash on Sky Sports with renewed confidence after a morale-boosting performance.