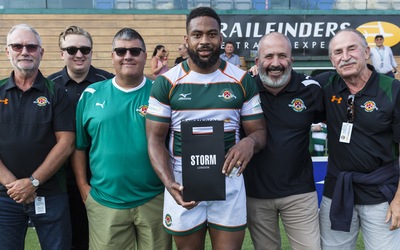 Ealing Trailfinders began the 2017/18 season with a bonus-point victory after a nerve racking 29-28 win over Cornish Pirates at Vallis Way.

The hosts had a 29-16 lead after 43 minutes but were forced to defend for large periods of the second-half, and the Pirates will feel hard done by to head back to Penzance with just a losing bonus point.

Ben Ward’s side made the ideal start with a try after just three minutes. A break down the middle gave Ealing front-foot ball, and it was spun wide to Will Harries who raced clear from outside the 22 to give his team a 5-0 advantage. Peter Lydon’s touchline conversion extended the lead to 7-0.

Pirates fly-half Laurence May had his kicking boots on, and two penalties in quick succession cut the deficit to just one point with 15 minutes on the clock.

Man of the match Andrew Durutalo, who was outstanding throughout marked his debut with a try to edge Ealing further ahead. Straight from the top of a line-out the ball was passed to the USA international, and he used his force to run right through the middle of the defence and showed impressive pace to dive under the posts. Lydon’s conversion took the lead to 14-6, and it got better just two minutes later.

Some outstanding handling in the midfield saw the hosts race from their own 22 to the Pirates try-line, and after being hauled down just short the ball was spun wide. It went through the hands of the back-line, and Seb Stegmann dotted down in the corner. The conversion came back off the post, but the hosts now held a commanding 13 point lead.

Pirates responded straight away with a well-worked try from Kyle Moyle. The winger found space, and gathered his own grubber kick to score and bring his side back in to the match. May’s conversion cut the lead to just six points as we approached half time.

There was still enough time for Lydon and May both to slot penalties, and the sides went down the tunnel with the score reading 22-16.

The second half started in the same fashion as the first, with Ealing scoring after just three minutes.

The try bonus-point was secured through Durutalo’s second score of the match. The forwards drove towards the line, and the flanker again used his strength to dive over his opposite number and score under the posts. Lyon converted to extend the lead to 29-16.

The Pirates refused to lie down and five minutes later Tom Lawday scored from close range after they kicked a penalty to within five metres of the try-line, which was then converted by May.

For the following 25 minutes it was the men from Penzance who were peppering away at the Ealing try-line, and only some outstanding defence denied them a number of tries.

With five minutes remaining the Pirates finally got another try to cut the deficit to just a single point. Toby Freeman went over after a number of phases on the line, and the conversion could have given them a one point advantage. However it flashed to the right of the posts, and gave the hosts a narrow 29-28 lead.

For the final stages Ealing showed excellent game management and kept the ball amongst the forwards to see out what was a nail-biting match, but eventually secured a bonus point victory to get the season off to a positive start.