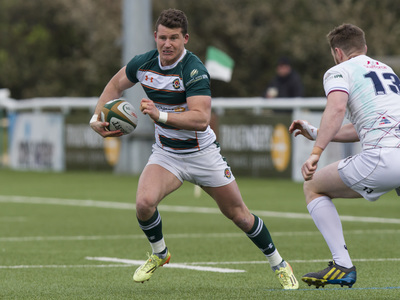 Ealing Trailfinders ended their season with a seven-try victory over Rotherham Titans, a side who had won all three matches between them earlier in the season.

Victory meant that Ben Ward’s side finish one place and one point behind the South Yorkshire side in the Greene King IPA Championship and they will renew their rivalry next season.

After the match opened with a bang when Arthur Ellis ran deep into the Rotherham half from kick-off, errors began to creep in.

Ealing Trailfinders’ James Love and Rotherham’s Will Owen knocked on close in, while Ellis came to his team’s rescue by stopping Darran Harris on the line.

Alun Walker eventually opened the scoring for the home side when he barrelled over from close range after Tom Trotter’s quick tap penalty had taken play up to the Rotherham line.

The home side enjoyed the bulk of territory and possession and they were further rewarded when Ellis was twice driven over from line-outs before the break.

Luke Daniels continued to impose himself on the match with his pace, but as the second half wore on the Titans worked their way back into proceedings and after twice over-throwing line-outs on the Ealing Trailfinders line, substitute Jack Preece eventually scored from a rolling maul.

The hosts hit back immediately when Love jinked past Michael Keating to set Adam Preocanin free to charge home and wrap up the four-try bonus point. Love then set Daniels free to race away for the fifth.

As the clock and season drew to a close Newcastle-bound Harrison Orr signed off his time in W13 with a try and scrum-half Trotter scored a richly deserved first in Ealing Trailfinders colours.

George Edgson pulled one back for Rotherham, but by then the result was long decided.