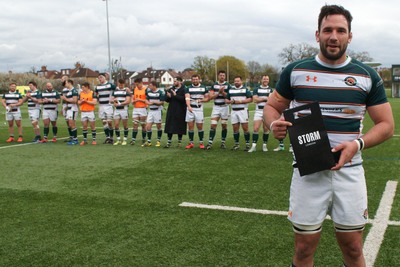 Ealing Trailfinders ensured their place in the Greene King IPA Championship next season with a nail-biting clash against old rivals Jersey, who came close to staging a second-half fightback.

James Love kicked two long-range penalties in the second-half to keep the visitors at bay, with the second calming nerves as the clock ran down to keep the Channel Islanders at arm’s length.

Jersey pressured early on from kick-off, but Ealing Trailfinders’ defence kept their shape and a strong tackle by Toby Howley-Berridge on Pierce Phillips set the tone. Ealing Trailfinders’ pack then played their part to the full; first by forcing a knock-on at a line-out and then by shoving their opposite numbers of the ball, dominance that was to continue as the half went on.

Neither team were able to find any rhythm early on and the match swung back and forth. Luke Daniels led a strong counter-attack that brought the crowd to their feet, but after linking with Arthur Ellis Jersey’s defence recovered to snuff out the threat.

Ealing Trailfinders pack continued to enjoy dominance at the scum and off the back of one on the half-way line the ball went wide, Daniels broke the Jersey defence and he put Love free to race away to the corner for a try that Jonny Bentley converted.

Jersey fullback Ross Adair showed that the visitors carried a threat in attack and he broke the Ealing Trailfinders line as the Channel Islanders sought to hit back, but prop Will Davis raced back to stick out a well-timed arm and stop the move.

Ealing Trailfinders continued to press and after the pack twice tried to roll a maul over, Alun Walker wriggled through a group bodies to ground the ball. Ben Ward then added the conversion.

Daniels nearly put Love away for a second, but the pass was marginally forward. The pack won another penalty from the scrum though and after Ellis and Chris York were stopped short, Iain Grieve powered through from close-range.

As half-time drew closed Nick Campbell pulled a try back for Jersey after Gary Graham had gone close, but soon after the restart Ward slotted a penalty to give Ealing Trailfinders some momentum.

Substitute Uili Kolo’ofa’i was driven over for a try to reduce the arrears, Love hit back with a penalty from just inside the Jersey half and then Kolo’ofa’i grabbed his second in identical circumstances as the match began to open up.

As the hour mark approached Jersey began to enjoy their best period of the match and fly-half Cope found his form. Pierce Phillips secured a four-try bonus point from another driving maul and Cope’s conversion brought the visitors to within a point.

Jersey’s pack and after Ealing Trailfinders’ pack had stopped a number of attempts to maul over, Ellis swept on a loose throw to relieve the pressure.

It gave Ealing Trailfinders the momentum to keep their opponents in their half and when Love had the chance to score a second penalty he duly obliged to leave the Channel Islanders needing a converted try to win.

They were unable to find a way through and the home side were happy to run the clock down until Ward was able to hoof it to touch to ensure their place in the Championship next season.