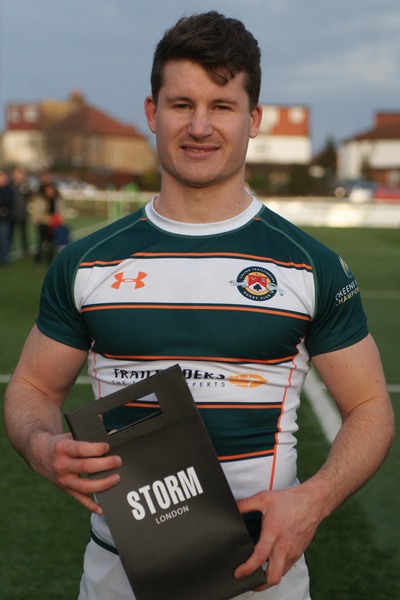 Ealing Trailfinders ran in seven tries and lifted themselves off the bottom of the Greene King IPA Championship with a highly impressive win over their relegation rivals.

The victory lifts Ealing Trailfinders off the bottom of the table and above the Birmingham side by two points.

Luke Daniels was the STORM Watches man of the match, but there were any number within Ben Ward’s team who could have been given the award, not least Rhys Crane who ran in four tries.

It didn’t take long for the scoring to start when Moseley fly-half Charlie Foley knocked over a first minute penalty.

Ealing Trailfinders maintained their composure and the ball in hand while playing into the wind and Phil Chesters was unfortunate not to finish a counter-attack when the ball failed to bounce his way after a chip ahead.

Moseley stretched their lead further when Adam Caves was driven over, but Ward’s first penalty calmed nerves and a minute later his break set Daniels free and he gave Chesters a straight-forward run-in.

Crane then grabbed his first off another Daniels break and with the fullback converting both tries, the match had been turned on its head in the blink of an eye.

With so much riding on the result Moseley regrouped and after kicking a penalty to touch Craig Voisey added their second to close the deficit to two points at half-time.

A thumping Howley-Berridge tackle on Aaron Flagg opened up the second half and moments later Ward’s scored his second penalty.

The hosts used the wind assiduously and after pressuring the Moseley line Adam Preocanin popped up on Alex Walker’s shoulder to stroll over and with Ward off, Jonny Bentley continued their flawless kicking ratio.

Crane secured the four-try bonus point and then the Ealing Trailfinders defence stood firm as a Moseley tried another rolling maul before Darren Hudson knocked on with the line at his mercy.

A scrum-move set Crane up for his hat-trick and then he picked a line off Bentley to make it four.

As the clock ran down Chesters broke free, but George Watkins pulled him back and Andrew Small had little choice but to award a penalty try that Bentley converted to bring the curtain down on a match that will take Ealing Trailfinders to Bedford in good heart next Saturday.