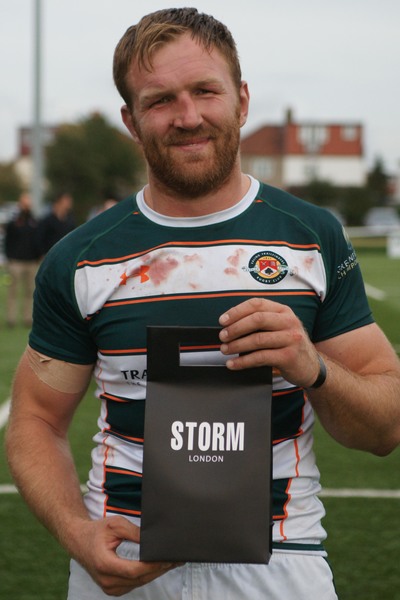 However, tries from Jack Wallace and Tom Varndell in quick succession in the second half gave Bristol the initiative and Gavin Henson’s kicking allowed them to keep Ben Ward’s side at arm’s length despite the best efforts of the hosts.

After only six minutes Chesters swooped on a loose ball and used his pace to outstrip one-time England winger Tom Varndell to score the opening tray. After Tristan Roberts converted it, the defence had its first serious test, but the home team’s defence held out Bristol centre Jack Tovey.

James Love stretched the lead further with a long-distance penalty, but the visitors grabbed a toe hold in the match on the half-hour mark when Henson banged over his first penalty. A second just before half-time ensured that Bristol were in touch at 10-6 behind at the break.

Early in the second half Ealing Trailfinders’ defence again denied Bristol their first try as good defence stop them from capitalising on an overlap close to the tryline. However, Henson knocked over a third penalty to close Bristol to within a point with half an hour remaining.

However, Ealing Trailfinders rediscovered their rhythm and began to enjoy a period of pressure that was eventually rewarded when second-row Hannay bundled his way over from close range.

Again Bristol stirred themselves into action and Wallace raced over following Will Cliff’s break and soon after Varndell picked a strong line off Tovey to receive his pass, race away from the defence to score and put Bristol in front for the first time.

Roberts scored two penalties in quick succession, but Adrian Jarvis score one of his own to stretch Bristol’s lead to 26-21 and establish himself as Bristol’s all-time leading scorer with 709 points.

Still the hosts pressed and late on James Stephenson was denied a late try for a forward pass.