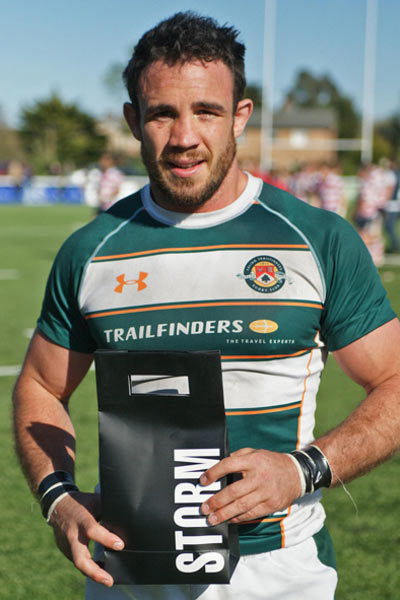 Ealing Trailfinders may have lost their unbeaten home record to an impressive Rosslyn Park side, but their losing bonus point and Park’s failure to claim all five points on offer ensured their return to the Greene King IPA Championship.

At fulltime captain Tom Brown lifted the National 1 trophy in front of a season’s best crowd of 2, 278.

Rosslyn Park demonstrated their intentions from the whistle when former Ealing Trailfinders flanker Sam Shires put in a fierce hit on captain Tom Brown. It set the early tone and soon after Brown teamed up with Arthur Ellis to stop a pick up from Park captain Hugo Ellis.

Park flyhalf Scott Sneddon opened the scoring when he landed a fourth-minute penalty and he then added a second before the 10-minute mark. It spurned the home team into action and while they raised the intensity they were unable to find a way through Park’s defence, who twice stopped catch and drive attempts.

Park centre Paul Mackey came close to scoring the first try when he broke the line, but Will Harries made a try-saving tackle. The visitors added to their lead soon after though when Sneddon knocked over his third penalty.

The hosts responded immediately though as Luke Daniels picked up a loose ball and sped past three defenders to score in the corner. A flowing move from a Harries counter-attack appeared set to earn Ealing Trailfinders their second try, but Phil Chesters knocked on.

Sneddon was back on the scoresheet in the 33rd minute with another penalty and he then set Mackey free with a deft off-load, but this time Alex Walker made the try-saving tackle.

Park maintained their pressure up to the halftime whistle and prop Alex Mackenzie dived over in the corner for a try that Sneddon had no problem converting.

After haltime Ealing Trailfinders were much improved and Daniels knocked over an early penalty. He then converted an Arthur Ellis try after the flanker burrowed over from close range.

As the clock ran down Ealing Trailfinders side raised the intensity again, but Park’s defence stood firm and meant that both teams were celebrating at the final whistle.