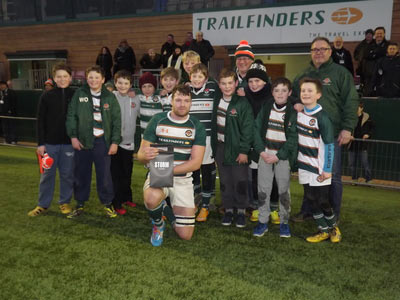 Ealing Trailfinders had to work hard to finish with a win against a dogged Esher side who were fully deserving of their losing bonus point.

The hosts ran in four tries, but the intensity of the match was reflected by no points being scored in the final 30 minutes, a period in which defences stayed on top.

Esher started the scoring early on when flyhalf Ian cross landed a well-struck penalty after Ealing Trailfinders were penalised at a lineout.

The visitors kept up their early pressure and Arthur Ellis had to be alert to clear up a chip over from scrumhalf Robbie Shaw. However, they stretched their lead soon after when Cross hit his second penalty.

Ealing Trailfinders hit back immediately when Phil Chesters added another try to his ever-burgeoning tally, but Esher’s determined defence kept the hosts attacking intentions in check.

Nonetheless on their next attacking foray, Chesters again broke free down the left for his second try that Luke Daniels converted.

Esher continued their abrasive approach and number 8 Brandon Walker and prop Cameron Zeiss both came close from driving runs. Daniels then had to be alert to stop centre Jack Cooke from finishing off a backline move, but they earned their reward when Cross landed his third penalty of the match.

Cross didn’t last the match however as soon after he went down heavily and unfortunately had to go off. A minute later Chris Kinloch swooped on a loose ball and linked up with Sam Wardingley who set Daniels free to race home for the hosts’ third try.

The visitors responded through their pack and closed to within one point by halftime after prop Zeiss burrowed over in the corner. Fullback Ali Chisholm took over the kicking duties and kept up Esher’s 100 percent record from the tee with a well-struck conversion from the touchline.

Chisholm put Esher back in front with another well-struck penalty three minutes into the second half, but after Esher were penalised Ben Ward kicked for the corner, Llewelyn Jones won the line out and Ellis was driven over to secure the bonus point.

Ealing Trailfinders managed to work their way on top of proceedings and Ellis, Chesters, Alex Walker and Paul Spivey came close to racing home, but Esher’s focus didn’t let up and in the end defences stayed on top as the clock ticked to the 80 minute mark.