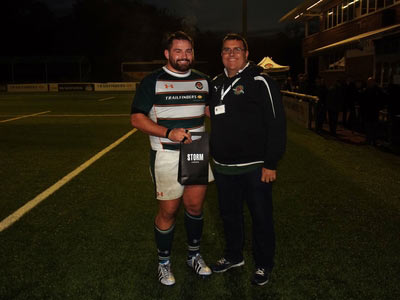 Ealing Trailfinders moved back to the top of National 1 in a rousingly entertaining match in which both teams were determined to attack with élan and brio and backed up their intentions with actions on the field.

Tynedale started in determined mood and they led within a minute of kickoff. Dutch international wing Sep Visser looped round to touch down between the posts for a try that fly-half Gavin Beasley converted.

It didn’t take Ealing Trailfinders long to hit back though and Phil Chesters scored in the corner to close the gap to two points.

Owen Bruynseels had chipped ahead down the right, Will Harries was unable to gather with the line at his mercy, but Arthur Ellis swept up and popped the ball to Chesters who had tracked the play across the pitch to his opposite wing.

After five minutes pause when two Tynedale players received treatment, the match resumed and immediately Ealing Trailfinders’ pack gained the ascendancy and won a penalty that was kicked to touch.

From the catch and drive the forwards hammered the Tynedale line and eventually Ellis found space to wiggle over to score.

Tynedale again scored when they went on the attack. After tapping a penalty they attacked left then right and flanker Dan Temm dived over and with Beasley’s conversion the visitors were back in front.

Ealing Trailfinders responded in the best way possible by immediately going down the other end and scoring to restore the lead. Will Harries scored in the same corner as Chesters and with Ward’s conversion the hosts led 17-14 with less than a quarter of the match gone.

Soon after Ealing Trailfinders secured the bonus point when captain Tom Brown was driven over from another catch and drive and a few moments later he ran in his second as the hosts’ attack had left the Tynedale defence in disarray.

Three more tries came as the first half drew to a close; Red Pennycook ensured all three starting back rowers ended on the scoresheet, Chesters dived over in the corner and Bruynseels marked his second match back from injury with a try that brought up the half century after Harries broke clear down the length of the pitch.

The second half nearly began in the same fashion as the first when Visser streaked clear down the pitch. Harries stopped him on the line, but substitute hooker Alex Westgarth was on hand to complete the scoring.

Ealing Trailfinders rediscovered their shape though and Andy Reay capitalised on quick ball, but Adam King ensured that Tynedale would leave with a try bonus point when he dived over in the corner.

Chesters wrapped up his hattrick from a big kick forward from Will Davis and the see-saw nature of the match continued when the Tynedale pack won a penalty try when Gary Johnson and Ellis were in the sin bin.

King scored a second down the right and as the whistle approached both teams did their upmost to keep the ball alive, though neither were able to add to their already numerous try count.