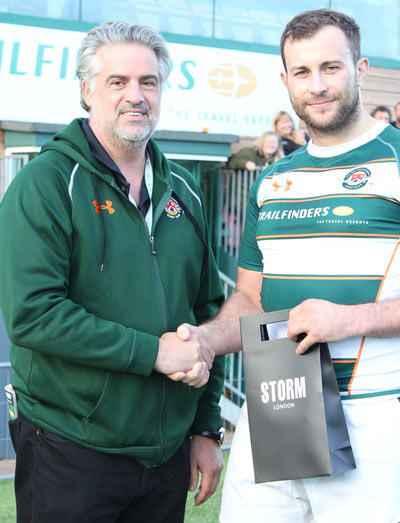 Ealing Trailfinders consolidated their place at the top of National 1 with a strong performance against bottom of the table Macclesfield.

Ben Ward’s team secured the four-try bonus point before halftime after scoring six tries in the first half and then added five more after the break. Wings Phil Chesters and James Love ran in a brace of tries and fly-half Matt Jarvis scored a try and nine conversions.

Flanker Redford Pennycock made his first appearance since joining Ealing Trailfinders over the summer and he was named STORM Watches man of the match in an impressive appearance.

It didn’t take long for Ealing Trailfinders to start the scoring when Love escaped down the right wing to score within the first minute and five minutes later captain Danny Kenny added a second when he picked up and ran home from the back of a scrum.

Macclesfield hit back though when a clever chip from Morton was collected by Brierley who scored between the posts.

Centre Sam Wardingley broke through the midfield defence just before the 10 minute mark to score Ealing Trailfinders third of the match and his first of the season, Steve Pape then used his power to score his first time in over a year and Love scored his second to stretch Ealing Trailfinders’ lead further.

Morton knocked over a penalty to take Macclesfield into double figures, but Chesters ran in his first of the match just before the halftime whistle

Prop Alex Penny scored his second of the season on the 48th minute and he then teamed up with the rest of the pack to score a penalty try from a rolling maul.

Macclesfield didn’t throw in the towel though and grabbed their second try when a tricky bounce caught out the Ealing Trailfinders defence and Hearn collected the ball to race home from a few yards out.

Loose-head prop Jamie Kilbane became the fourth player in the match to score his first try of the season and as the match wore down Jarvis added a try to his conversions and five minutes from time Chesters ran in his ninth try of the season to take him to joint top of the National 1 try-scorers chart.