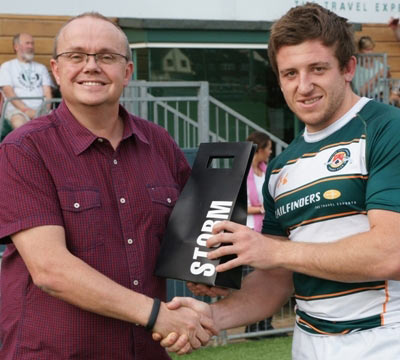 Ealing Trailfinders started their season with a five-point win over a dogged Loughborough Students side who fought hard for the entire 80 minutes and ensured that Ben Ward’s side couldn’t relax at all throughout the match.

After the match settled down following the initial exchanges it was the home side that scored first and they did so in simple fashion. Carwyn Jones took a good lineout catch, the pack drove him towards the line and with the ball working its way back local lad Arthur Ellis had the simple task of touching down.

Loughborough responded immediately though. Centre Rhys Owen broke through the Ealing defence and while he was stopped from reaching the line by Alex Walker, England U20 scrum-half Henry Taylor was on hand to fire the recycled ball wide to wing William Edwards who had an easy run into the corner.

Owen then increased their lead when he swooped onto a Ben Ward pass and raced away from his 22 to score.

Ealing Trailfinders settled down though and began to attack through the phases with the forwards leading the way and eventually their efforts were rewarded.

The pack won a penalty from a scrum when they managed to gather momentum with their drive. Gary Johnson caught Andrei Radoi’s lineout throw and again Ellis was at the back of the drive to dot down.

As the half wore on Edwards came close to racing away after he had wiggled free from Ealing’s defence, but Walker and Phil Chesters bundled him into touch.

It was then Chesters who went close when he chased down a Danny Kenny clearance, but he was unable to gather the ball with the line at his mercy and the teams went in at half-time tied at 10 apiece.

Ealing’s forwards again took an early grip on proceedings and three times they came close to a third catch and drive try having won a scrum penalty.

However, after Nathan Buck showed a good turn of pace his front row partner Kevin Davis was on hand to collect the recycled ball and drive over.

The pack continued to exert their dominance and from another catch and drive they mauled their way from the halfway line, but after crossing the Loughborough whitewash Danny Kenny was ruled to have been held up.

From the scrum they twice tried to push their opposite numbers over for a score and on the second attempt the referee whistled for a penalty try that James Love converted easily to wrap up the result.