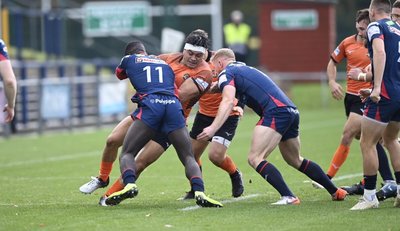 Ealing Trailfinders moved up to second in the Greene King IPA Championship after grinding out a crucial 24-9 win against Doncaster Knights in a dogged display at Castle Park.

Ben Ward’s side held a one point lead at the break but controlled the game in the second half to ensure that they made it two away wins in a row, ending the first block of league matches on a high.

The first half was an arm-wrestle throughout with neither side able to gain any momentum due to a lack of discipline, and by the end of the match referee Tim Wigglesworth had awarded 30 penalties as both teams struggled in the conditions.

The Trailfinders started well but failed to convert their dominance in to points after chances for both Harry Sloan and Sam Dickinson passed by, and then the Knights edged ahead from the kicking tee.

Sam Olver put the hosts 3-0 in front on the 20 minute mark, but straight from the re-start the Trailfinders got a penalty of their own and Craig Willis smashed it through the posts to level the score.

Lewis Jones was sent to the sin-bin for a high tackle with 30 minutes on the clock and from the resulting penalty Olver edged the Knights 6-3 ahead, but there was time before the break for the visitors to make their mark.

A penalty was kicked to the corner just 10 metres from the try-line, and a smart move saw Andrew Durutalo smash his way over the line to put the Trailfinders in front for the first time in the game. Willis converted, extending the lead to four points as half time approached.

Olver was then on the money from the tee again with the final play of the half, meaning that the Trailfinders were one point in front as the teams headed down the tunnel.

There was a different side to the Green and Whites in the second half, they came out with far greater intensity and purpose as they went in search of the victory.

With 50 minutes on the clock a whole host of replacements were made and they had an outstanding impact to boost the Trailfinders to the win.

They were left frustrated as once again their discipline was costing them at crucial moments, but as the clock ticked past the hour mark they landed the killer punch.

A five metre scrum gave them the platform, and Will Davis then picked his way to the line to dot down for the decisive score. Willis’ conversion took the lead up to eight points, crucially beyond a converted try.

Craig Willis then shone with a number of kicks in behind to ensure that the Knights were unable to threaten, and with just two minutes remaining Rayn Smid scored to put some extra gloss on the scoreboard.

A penalty was taken quickly by Nathan Fowles, and he had the captain on his shoulder who powered over in trademark style. Willis added the extras to give the travelling supporters another reason to smile.

In the final play of the match the Trailfinders chased the bonus point but ran out of time, and the ball was smashed in to touch to confirm an impressive win.