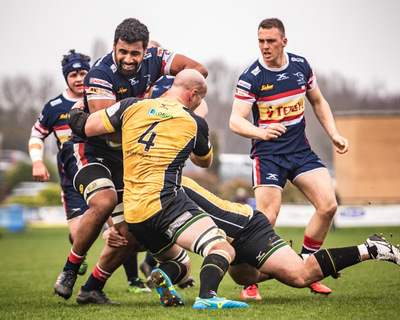 Doncaster Knights overpowered an uncharacteristically lethargic Ealing Trailfinders as the Londoners suffered their first defeat since February, falling 50-19 to the Knights at Castle Park.

The Knights scored seven tries and despite two scores from James Cordy Redden as well as a try from Luke Carter there was to be no repeat of a number of memorable comebacks this season as a relentless display from the hosts gave them a deserved victory.

Doncaster got off to the perfect start with a try in the opening two minutes from Lloyd Hayes. The Trailfinders had possession and were looking to go forward, but a turnover was spun wide and allowed the inside centre to dive over in the corner for the first points of the afternoon. Dougie Flockhart’s touchline conversion gave the Knights an early 7-0 lead.

That lead was doubled on the 10 minute mark as Cameron Cowell went over for the second try of the match. Again the Trailfinders were in possession but lost the ball softly, and the ball fell in to the arms of the full-back who had a clear run to the line from 40 metres out. Flockhart again converted to extend their lead to 14-0.

The West Londoners then began to settle and came back in to the match with a try from Luke Carter. Three consecutive penalties took them right up to the try-line, and despite the maul being brought down the scrum half was able to power over from close range to score. Luke Daniels converted to cut the deficit to just seven points.

Doncaster then dominated possession for the remainder of the first half and could have been further in front but two missed penalties from Flockhart let Ben Ward’s men off the hook.

However a third try for the Knights with just five minutes left of the first 40 minutes gave them further breathing space. Aaron Penberthy’s wide looping pass was intercepted by Andy Bulumakau who showed impressive pace to make it to the line. Flockhart converted to put his side 21-7 as half time approached.

With the final play of the half a chance for the visitors saw a loose ball pounced on by Lewis Jones who ran up to the half way line, but his grubber ahead was gathered by former Ealing man Curtis Wilson who kicked the ball out to signal the end of the first half.

Doncaster got off to the perfect start in the second half with another try from Andy Bulumaku to put themselves firmly in control. A number of phases saw them edge towards the line, and then the centre beat his defender to dive over for the bonus point try.

The Trailfinders responded straight away as they began what would need to be a remarkable turn around. Luke Carter and Joe Munro combined in the midfield to break the line of defence, and then the ball found the big winger who powered over the final defender to score. The conversion from Daniels cut the gap to 28-14, but it was Doncaster who were to get the next score to all but end the contest.

Jack Ram bundled over from a five metre lineout to put the result beyond doubt, and that was quickly followed by another try for the hosts as Charlie Foley’s neat dummy saw him run straight through the middle of the defence to bring up the 40 point mark.

Cordy Redden then got a late consolation for the Trailfinders as a break from debutant Ollie Stedman gave them front foot ball and allowed the winger to score in the corner, but the final score of the day would deservedly go to the hosts as Curtis Langdon went over from the base of a scrum to round off a miserable day for the Londoners.

Ben Ward’s side now welcome Hartpury to Vallis Way next weekend as they look to get back to winning ways, knowing a victory will secure them second place in the Greene King IPA Championship.