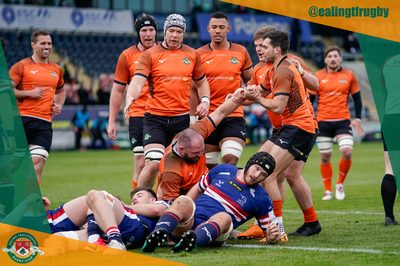 Ealing Trailfinders made it two wins from two in the Trailfinders Challenge Cup after an impressive 46-26 victory over Doncaster Knights at Castle Park.

Despite the convincing victory, it was the Knights who started strongly and took the lead after just four minutes. The Trailfinders were on the attack but a fumble allowed Tom Bacon to grab the ball and race away from 80 metres out to dive under the posts. Sam Olver’s conversion gave the hosts a 7-0 advantage.

That seemed to galvanise the West Londoners, who went up a level for the remainder of the first half as they took control of the match.

James Cordy Redden marked his return to the starting line-up with a try to get the visitors off the mark with 15 minutes played. Luke Daniels carried to within five metres, and then an overlap on the shortside saw the ball go through the hands quickly to the winger who finished acrobatically in the corner. Craig Willis’ touchline conversion brought his side level.

Will Davis then gave the Trailfinders the lead with a brilliant individual try. The loosehead prop gathered the ball just inside the 22 and bulldozed past his opposite number before showing a turn of pace to stretch to the line. Willis added the extras for a seven point lead.

Bobby de Wee then scored his first try for the club just before the half hour mark as the lead continued to increase. A penalty was kicked to the corner and then from just five metres out the rolling maul powered over with the South African the beneficiary.

Guy Thompson then got the bonus point try before the break from another rolling maul. The set-piece was giving the Trailfinders the ideal platform, and now it was the flanker’s turn to cross the whitewash from close range as the visitors flexed their muscles. Willis’ conversion meant the lead was up to 19, and there was still time for one more try as we approached half time.

In the final play, Mitchell attempted to kick the ball in to touch but Craig Hampson read it and charged it down, with the ball bouncing up perfectly for the scrum-half who could stroll over the line. The conversion from Willis meant that the Green and Whites headed down the tunnel with a 33-7 lead.

Doncaster rallied at the start of the second-half and scored twice in the opening 10 minutes to get themselves back in to the match.

Kyle Evans gathered a cross-field kick to score in the corner, and then Will Holling went over from a rolling maul as the lead was cut to 12 points with 30 minutes remaining.

The Trailfinders then responded brilliantly with a sensational try from David Johnston. Cordy Redden broke through the middle and then Steven Shingler’s inch-perfect kick found the Irishman in the corner who timed his turn to perfection and slid over to score.

Ben Ward then made a large number of replacements as the squad got some much-needed game-time and aimed to see out the final quarter.

Doncaster then got a deserved bonus point on the hour mark as Aaron Reed scored their fourth try. The winger got the ball in open play with 25 metres ahead of him and raced away to show his pace against a tiring defence.

That try meant the lead was down to 12 points, but Steven Shingler then smashed a close-range penalty through the posts to move the gap over two converted tries.

Dean Hammond then rounded off the scoring with a fantastic try to cap a memorable away performance. Pat Howard broke through the defence and stormed in to the 22, before offloading to the winger who slid over despite a last ditch tackle.

Shingler then smashed the ball off the park as the visitors signalled their intent ahead of the trip to Saracens next Saturday in the next round.