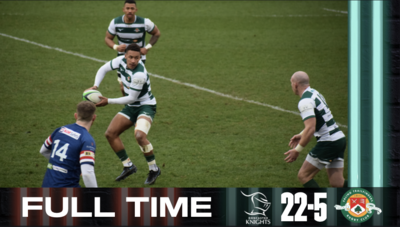 Ealing Trailfinders fell to their second defeat of the Championship season on Saturday afternoon, as Steve Boden’s Doncaster Knights kept hold of their unbeaten home run this campaign with a hard-fought win.

With Christmas soon upon us, it was time for two of the Championships most in form sides to go into battle on Saturday afternoon in Yorkshire, with both sides looking for an early holiday present.

On a fresh November afternoon, the men from West London travelled north to face a Doncaster side in a game that could prove to be a vital fixture for both sides vying for a spot at the top of the Championship table come March.

It was the home side who came out of the block the fastest, and with just three minutes on the clock, they had their first points on the board after they found space down the left wing through Samuel Graham, as he broke free from his tackler, feeding the ball to Maliq Holden to race away dot down. The extras being added by Sam Olver.

The boys in green and white knew that they were going to face a tough day at the races and in conditions that saw the visitors kicking into the wind, proving a key advantage in the opening exchanges.

Just moments later, Olver took advantage of the wind behind his back, knocking over a penalty from long range, after Trailfinders were penalised just within their half. The fly-half extending the Yorkshire sides lead to 10 inside the first 10 minutes.

In what was a tough opening to the game for Ben Ward’s side, the visitors found a resistant force in Doncaster’s defence which saw the home side close all the doors, to keep their visitors out time and time again in the first half.

A harsh swirling wind coming into the ground behind Doncaster’s back was playing right into the hands of the home side, with aerial options few and far between for Trailfinders. Struggling to get a grip hold of the game, the visiting side were met with physicality from Boden’s side, who would go into the break holding onto their 10 point lead, the first time this season that Trailfinders would go into the break scoreless.

Getting into the changing room and having a reset seemed to be just what Trailfinders needed, a breather to adjust and work out how to attack their hosts. Suddenly the wind was in Ward’s sides favour, as the first blows of the second period saw Doncaster pinned inside their half.

In a sustained spell of pressure, Trailfinders continued to look to pierce the Doncaster defence, but every time they began to see some daylight, the ball was either lost forward or turned over at the breakdown; these would prove to be pivotal moments in a tight affair between two attacking sides.

Halfway through the second period Doncaster turned the screw when a clever kick over the top by Sam Oliver pinned Trailfinders inside their own 5 metre, subsequently conceding a penalty within their 22. They would go to the corner, driving from the lineout and crashing over with George Edgson dotting down.

With the game quickly slipping through the visitors' hands, Trailfinders needed to make the most of their possession and needed points fast.

That breakthrough finally came when a line out from Jan-Henning Campher was brought down, and Ben Ward’s men went through the motions to drive home over the line, Simon Uzokwe dotting down for his seventh try of the Championship campaign.

It proved to be too little too late though and with five minutes left on the clock and chasing the game, a move across the Trailfinders back line was intercepted with a breakaway being offloaded to Jack Spittle, who would race away to dot down and all but secure the win for the Yorkshiremen.

A tough day at the office, but one that the West Londoners will have to get over and learn from quickly with Ampthill visiting Vallis Way in Round 10 next weekend.