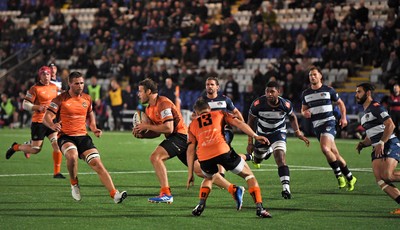 Ealing Trailfinders got their eighth successive victory as they registered a highly impressive 17-8 win against Coventry at Butt’s Park Arena.

Ben Ward’s side benefited from a strong first half performance and eventually ground down their opponents to continue their perfect start to 2020.

Tries from Pat Howard and Kieran Murphy as well as four points from Craig Willis and three from Steven Shingler ensured that they left Coventry with the win.

The opening exchanges saw both sides trying to work each other out in the bordering torrential rain, but once they had adjusted the Trailfinders took the lead in sensational style.

Reon Joseph broke the line on half way and stepped past four defenders before being brought down deep in side the 22. They then went through the phases and Craig Willis saw Pat Howard in space so kicked out wide to the winger who gathered and dotted the ball down in the corner. Willis then converted from the touchline to give the visitors a 7-0 lead.

Coventry almost responded immediately from the restart as a fumble gave them an opportunity, but Nathan Fowles scrambled back and managed to clear the danger.

The hosts did however get on the scoreboard from the following phase, as a penalty on half way was kicked straight through the posts by Rory Jennings, cutting the lead to four points.

The home crowd were then collectively on their feet as Louis Brown gathered a high ball and raced away in to the Trailfinders’ 22, but just as the final pass looked to have created a try the referee pulled play back for an earlier infringement to the relief of the travelling supporters.

A succession of penalties then took the Trailfinders right up to the try-line but twice they met resolute maul defence which managed to hold the forwards up twice in a row.

Harry Casson then gathered his own charge-down and looked like he would mark his return to the starting line-up with a try, but again was held up to force another scrum. Rayn Smid carried from the base and thundered over his opposite number to get within touching distance, but more frustration followed as the defence held firm.

The Trailfinders could have been forgiven for becoming agitated, but their persistence was rewarded on the half hour mark as they crossed for their second try. A five metre scrum gave them the platform, and then from the next phase Kieran Murphy was helped over the line by his fellow back-rowers to increase the lead. The conversion from Willis pushed the advantage up to 14-3.

For the remainder of the first half Ben Ward’s men were in control and their dominant carries were constantly allowing them to get over the gain line. A penalty from Willis provided the opportunity to go further in front but it went narrowly wide in the wind, so they ran down the clock and with time in the red they kicked the ball in to touch, and run back in to the tunnel with a deserved eleven point lead.

The Trailfinders came within inches of making the perfect start to the second half as the rain and wind returned. Sam Dickinson picked a great line and broke in to the 22 before offloading to Elliot Millar Mills on his shoulder. The ball was then popped up to Nathan Fowles who had a four man overlap on the right wing, but the pass went to ground and Coventry managed to survive.

Adam Peters was then sent to the sin-bin for the hosts as the West Londoners looked to land a significant blow, but once again they were met by a spirited Coventry defence. After winning the lineout the Trailfinders went through phase after phase right on the line, but found no way past and eventually knocked on.

Will Davis was then given a yellow card as Coventry looked for a way back in to the match, and with the penalty count rising the home crowd were becoming more optimistic. Tom Kessell took a penalty quickly and had 30 metres of unattended grass ahead of him, but the ball went forward to the relief of the Trailfinders. From the resulting scrum Willis looked to clear but his kick was charged down, and only a last gasp gather from Nathan Fowles stopped a certain try.

The hosts did then get the try that they craved with 15 minutes remaining as the weather began to cause havoc. A kick ahead from Jennings bounced up horribly and it ricocheted off Peter Lydon straight in to the hands of Andy Forsyth who was able dot down from just a metre out. The conversion however crucially went wide, meaning the Trailfinders still held a 14-8 lead.

Then came a huge moment with just 10 minutes left as a penalty was awarded to the Ward’s men on the half way line. With the wind behind him Steven Shingler lined up the kick at goal, and struck it beautifully between the posts to take the advantage up to nine points.

Jack Tovey was then yellow carded for a no-arms tackle but there was to be no damage from it, as the West Londoners held out for the last six minutes to record another fantastic victory at Butt’s Park Arena.