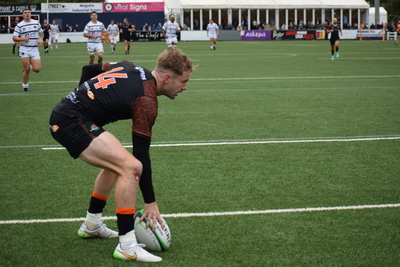 The West Londoners travelled to Butts Park Arena to face a Coventry side unbeaten at home so far this Championship Rugby season. In a line up which was saw an unchanged starting 15 from the one that beat Nottingham a fortnight ago, Ealing Trailfinders headed north looking to keep hold of their top spot in the Championship.

It was Coventry who started spritely and put the first points on the board when they were awarded a penalty after Ealing Trailfinders were penalised for not rolling away, with Tony Fenner successful from the boot.

It didn’t take long for Trailfinders to kick into gear though, when with just minutes into the game a break down the left wing from Charlie Walker put Craig Hampson in at the corner to dot down for the travelling sides first try of the game.

Just moments later the West Londoners put another five points on the board when another quick break from the back line saw Craig Hampson dot down once again, this time being fed the ball after a great break from Pat Howard, a dominate opening 10 minutes putting Trailfinders well in control.

Six minutes later it was time for try number three for Trailfinders, after a number of phases with referee Sara Cox penalising Coventry at the breakdown within their own 22, the ball was fed to Back-Row Simon Uzokwe to power home for his third try for the season.

The bonus point was almost wrapped up mid way through the opening half, when some clever footwork from Angus Kernohan after a dropped ball led to a break down the right side with David Johnston looking for the corner, speeding away he was just caught before the try line as the ball was lost and Coventry were able to clear to touch at the half way line after some quick hands within their own 5 metre.

The first half was becoming quite the penalty fest with Coventry being constantly pinged for infringements, however Trailfinders couldn’t quite take advantage as it remained 3-19 for another 15 minutes as both teams traded blows.

The Coventry wall was finally broken down again though after another penalty conceded by Coventry led to a number of phases from Trailfinders within the opponents 5 metre, the ball ending up fed back by Hampson to Pat Howard who showed strength to battle his way over the line to dot down, and the bonus point in the bag.

Moments later Hampson intercepted a loose Coventry pass at Trailfinders 10 metre line, racing away he couldn’t be caught, dotting down for his hat-trick and Ealing Trailfinders fifth try of the afternoon.

With Trailfinders well on top, momentum was well with the travelling side and they made it six tries just moments before the break, a line out drive from the line out, after another penalty was awarded led to Shaun Malton driving over the line at the back of the rolling maul.

The second half burst into action and fast! As winger Charlie Walker intercepted another loose Coventry pass, sprinting away from just inside the Coventry half to score and extend Trailfinders lead to 43-3 with 35 minutes still on the clock.

Coventry weren’t to go down without a fight and something for the home fans to celebrate, a good spell of possession within Trailfinders 22 finally led to some success. Several attempted drives for the line finally led to club captain Ryan Burrows dotting down, much to the avail of the Butts Park Arena faithful.

Moments later it was time for Trailfinders substitute Jordan Burns to pick up a loose ball, running 35 metres clear of the chasing Coventry defence, to score on his 50th appearance for the West London side.

The home side were given another chance to celebrate with just over 10 minutes left on the clock when the ball was quickly spread along the back line to Sam Aspland-Robinson who raced away in the corner to score.

In what was becoming a very end to end affair substitute Jan-Henning Campher scored with a carbon copy of Shaun Malton's try, powering over the line at the back of the driving maul for the eight score of the game.

Coventry were not giving up on their hunt for a losing bonus point though as a great break down the wing led to substitute Aaron Hinkley fighting his way over the line for the home sides third try of the afternoon.

Charlie Walker try, ball worked along the backs from Reuben Bird-Tulloch to Charlie Walker who dots down in the corner to wrap up another convincing win for Ben Ward's men, with another 70 point hall against Championship opposition.

A result that the Trailfinders will be happy with, as they head home next week to face local rivals London Scottish at Trailfinders Sports Club.