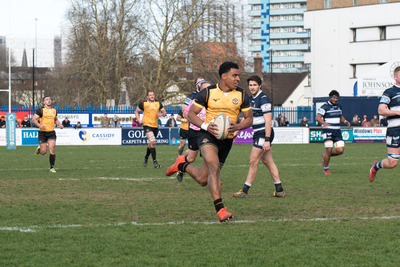 Ealing Trailinders got back to winning ways with a hugely impressive 61-20 victory over Coventry at Butt’s Park Arena.

Ben Ward’s side scored nine tries in a clinical attacking display as they rampaged to a dominant win in the Midlands. A memorable hat-trick from Reon Joseph as well as tries from Seb Stegmann, Kieran Murphy, Jordan Burns, David Johnston, Craig Willis and Lewis Jones secured the emphatic win.

The visitors made an lightning quick start and raced in front after just seven minutes with a try from Reon Joseph. Craig Willis’ inch-perfect cross-kick was gathered brilliantly in the air by the winger who then used his searing pace to run clear from 40 metres. Willis added the conversion from the touchline to give his side an early seven point advantage.

Coventry looked for an immediate response but the clinical Trailfinders would extend their lead on the 15 minute mark with another exceptional try. David Johnston broke through the defensive line and had Joseph on hand, who this time decided to pass to Seb Stegmann who had a free run to the line in the corner. Willis again added the extras as Ben Ward’s side looked back to their best.

Will Maisey capitalised on some ill-discipline from the visitors to kick two penalties in quick succession as the lead was cut to eight points, but the Trailfinders hit back to take control of the match before the break.

Kieran Murphy scored their third try just before the 30th minute to extend the lead further. A penalty was kicked to the corner and the forwards mauled towards the line before Murphy was able to break away to go over the line from close range. Willis, who clearly had his kicking boots on put the conversion between the posts to give the Green and Whites a 21-6 advantage.

Jordan Burns then went over to secure the bonus point in front of a stunned home crowd. Murphy, who was outstanding throughout bulldozed over the defence and offloaded to Burns who was never going to be caught from just 10 metres out. The conversion was once again added as the lead went up to 22 points.

Seb Stegmann went close to try number five when he capitalised on a huge hole in the defence to charge towards the line but from the following phase a knock on allowed the hosts to escape.

Coventry got a lifeline with the final play of the first half to get back in to the game. Tom Kessell broke and was brought down just short, but he had Will Maisey on his shoulder who dived under the posts for their first try of the match. He converted his own try as the West Londoners went down the tunnel with a 28-13 lead at the break.

The Trailfinders started the second half in the same way that they began the match with a huge amount of intent and they took just three minutes to go over for the first score of the half. A maul powered to the line and when it was brought down a free play saw Willis kick in behind, which bounced perfectly for David Johnston to dive under the posts. The fly-half again converted to extend the lead back to 22 points.

The momentum continued and Reon Joseph scored another wonder try just before the hour to put the result beyond doubt. He broke down the wing and played a clever one-two with Jordan Burns before using footwork to step past the final defender. The conversion went narrowly wide but the visitors were now up to the 40 point mark.

Try number seven followed 10 minutes later as Craig Willis capped off a great display with a deserved try. A set move from the base of a scrum on half way saw Lewis Jones and Seb Stegmann combine down the wing and took out the last defender to give the fly-half a clear run to the line. He converted his own try to take the lead over 30 points.

It got better for the Trailfinders as Lewis Jones was next to go over the line in the closing stages. The centre stripped his opponent in defence and then showed superb pace to run through from 50 metres. The extras were again added by Willis as the visitors brought up the half century of points.

Reon Joseph then completed his hat-trick with just five minutes left to mark a memorable day for the teenager. Laurence May stepped his way past a number of defenders on the right wing and then passed inside to the winger who was able to bundle over the line. The extras from Willis took the Trailfinders over the 60 point mark to the delight of the travelling supporters.

Coventry closed the scoring with a consolation try from Sam Tuitupou in the final minute, but the referee’s whistle signalled a fantastic day as the Trailfinders got back to form in stunning style.