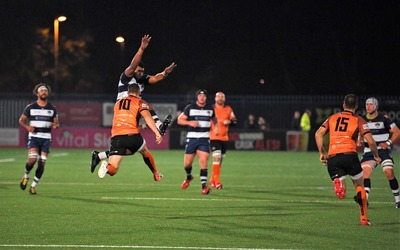 The West Londoners scored eight tries in total, including five in the second-half as they continued their perfect start to the season.

Fraser Strachan and James Cordy Redden both scored, whilst Rayn Smid, Will Davis and Simon Uzokwe all crossed twice on a memorable evening for Ben Ward’s men.

The Trailfinders made the best possible start, and scored their first try with less than a minute on the clock. Bobby de Wee charged down Coventry’s exit and looked as if he would make it on himself from just inside the 22, but after being tackled the ball was spun straight to Rayn Smid who strolled over from close range. Craig Willis added the conversion, putting his side 7-0 ahead as the clock went past 60 seconds.

Coventry responded perfectly, and scored two tries in quick succession to take the lead. Play opened up in the midfield with plenty of space as they played at impressive tempo, and Rob Stevenson found himself with a one-on-one in the corner, powering over the final defender to score, which was the first try against the Green and Whites this season.

Just five minutes later a string of penalties saw them kick deep in to the 22, and from the lineout they mauled over the line as Nic Dolly dotted down from the base. Tony Fenner’s touchline conversion put the hosts 12-7 ahead with 15 minutes played.

The visitors then had a huge chance to get level but a fumble at the crucial moment allowed the hosts to escape. Simon Uzokwe broke through after a powerful run and attempted an offload to Johannes Jonker who had acres of space around him, but the pass unfortunately went to ground.

Bobby de Wee was then sent to the sin-bin for a dangerous tackle, and then the frustration increased as a rolling maul looked to be powering over but they were penalised for crossing in the act of scoring.

Both sides were matching each other with huge physicality and were trying to inch up the pitch with their kicking game in a tight first half.

Will Davis, who came on with five minutes left of the opening 40 minutes then scored a crucial try in the closing stages to bring his side level. Fraser Strachan broke off the back of a lineout and was brought down just two metres from the line, and the visitors built patiently before the proper crossed to continue his try-scoring form. The conversion came back off the post, and the sides went down the tunnel all square at 12-12 at the break.

The Trailfinders came out totally reinvigorated for the second half and took control of the match with a simply sensational spell of play which saw them pull away from their opponents.

The captain started the second half like he did the first with a try, and this time it was a brilliant individual effort. The skipper got the ball 25 metres out, and bulldozed his way over the first defence before showing his searing pace to run clear and dive under the posts. The conversion from Willis gave the visitors a seven point lead.

Just two minutes later Fraser Strachan scored for the third week in a row to secure the try bonus point. The ball comically came off Smid’s head in the air, and then fell to Elliot Millar Mills, who offloaded brilliantly and then found the centre who was able to glide over under the sticks.

Angus Kernohan was inches away from joining the party as he looked to gather Willis’ cross-field kick, but the bounce of the ball was cruel and it went dead.

Simon Uzokwe then marked his first competitive start for the club with two tries in four minutes as the Trailfinders continued to go through the gears.

A quick tap penalty took the Trailfinders just five metres out from the line, and then the powerful back-rower was never going to be stopped from close range as he rampaged over the whitewash. The extras took the lead over 20 points.

Uzokwe got his second virtually straight from the restart, as a penalty was kicked to the corner and the maul hammered to the line with the flanker the beneficiary to score again.

There was still time for plenty more action in the final quarter, as more gloss was added to the scoreboard.

Coventry scored their third from the base of a scrum as they caught the defence off guard, but the Trailfinders crossed twice in the last 10 minutes to bring up the half century.

Will Davis went over for his second as his scoring run continued. New signing Matt Gordon crashed through four tackles as he got over the gain line, and then the prop was able to stretch to the line from the next phase.

Steven Shingler landed a monstrous penalty with two minutes left as his right boot dissected the posts from 45 metres out, and then James Cordy Redden scored a brilliant individual try with the final play of the match.

Turnover ball saw the visitors on the counter, and the winger was released one-on-one with 50 metres ahead of him, and he showed impressive pace to beat the final man and sign off the victory in great style.

Shingler’s touchline conversion signalled an end to the match, and concluded their best performance of the season so far with a 55-19 victory.